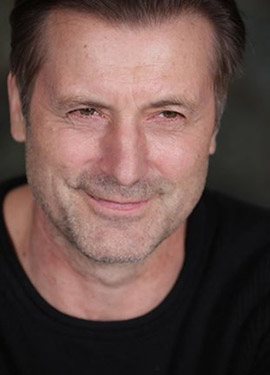 Actor and director, born in the Ukraine December 4, 1954. Gregory Hlady moved to Canada in the early 1990s, and now lives in Montreal, Quebec. He began his career as an actor in Kiev, subsequently studying in Moscow. He appeared in Pedro Calderons play The Constant Prince in 1981 at the Molody Theatre as a Portuguese prince who sacrificed his life in the name of the national interests. Soviet authorities banned the production, because it highlighted a patriotic struggle.

Hlady is most frequently associated with the Théâtre de La Veillée (Groupe [de] La Veillée, Espace de la Veillée) where he has directed Le Retour/The Homecoming (which won the Association québécoise des critiques de théâtre award for best production in 1993); Amerika; Le Roi se meurt/Exit the King; The Gambler by Fyodor Dostoyevsky (2016); The Dance of Death by August Strindberg (2012); The Wedding by Bertolt Brecht (2011); and Heart of a Dog by Mikhail Bulgakov (2008). He has also directed in Europe.

His directing style is very visual, physical and highly deconstructive of the text, with tangents created by his exploration of a work creating other tangents until the play has been turned inside out.

He has also acted in Russia and the Ukraine, and has appeared in over fifty television and film productions, including, most recently, District 31 (2020).