Bard on the Beach

Vancouver theatre company founded in 1990 in Vancouver, British Columbia with a mandate to present affordable, accessible, and high quality productions of Shakespeares plays. Its annual theatre festival takes place in Vanier Park from mid-June to mid-September in the open-ended 740-seat BMO Mainstage and the 240-seat Douglas Campbell Stage tent with a backdrop of city, sea and mountains.

The company began as an Equity Co-op, funded primarily by a Canada Council Explorations grant awarded to Artistic Director Christopher Gaze. A fully professional, not-for-profit theatre company, Bard on the Beach now engages thirty actors in two companies to perform four plays each season, as well as a team of exceptional directors, designers, and technicians. It is also supported by more than 250 volunteers. Attendance has grown from 6,000 patrons in 1990 to 100,000 in 2014. Over 1.9 million patrons have enjoyed Bard performances over its 31-year history. 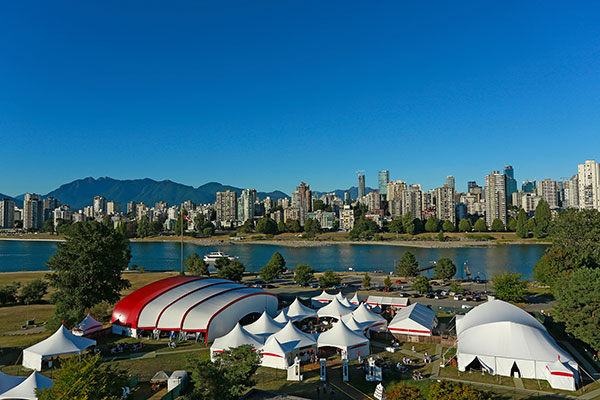 Bard on the Beach. Photo by Mike Clegg.

Four works are presented each summer in repertory. Productions include: Measure for Measure (directed by Miles Potter), Macbeth (John Juliani) and A Midsummer Night's Dream (Susanne Gillies Smith), all in 1999; The Tempest (Douglas Campbell ), All's Well That Ends Well and Henry IV, Part I in 2000; The Taming of the Shrew, Antony and Cleopatra and The Two Gentlemen of Verona in 2001; Twelfth Night, Henry V and Cymbeline in 2002; The Comedy of Errors, The Merchant of Venice and Pericles in 2003; Much Ado About Nothing, The Merry Wives of Windsor and Macbeth in 2004; As You Like It, Loves Labours Lost, Hamlet and Rosencrantz and Guildenstern are Dead (by Tom Stoppard) in 2005; A Midsummer Nights Dream, Measure for Measure, The Winters Tale and Troilus and Cressida in 2006; The Taming of the Shrew, Romeo and Juliet, Timon of Athens, Julius Caesar in 2007; King Lear, Twelfth Night, The Tempest and Titus Andronicus in 2008; All's Well That Ends Well, The Comedy of Errors, Othello, and Richard II in 2009; Much Ado About Nothing, Antony and Cleopatra, Falstaff (a combination of Henry IV, Part I and Henry IV, Part II) and Henry V in 2010; As You Like It, The Merchant of Venice, Henry VI: The Wars of the Roses and Richard III in 2011; The Taming of the Shrew, Macbeth, The Merry Wives of Windsor and King John in 2012; Twelfth Night, Hamlet, Measure for Measure and Elizabeth Rex by Timothy Findley in 2013; A Midsummer Nights Dream, The Tempest (Meg Roe), Cymbeline, and Equivocation by Bill Cain in 2014; The Comedy of Errors, King Lear, Loves Labours Lost (Daryl Cloran), and Shakespeares Rebel by C.C. Humphreys in 2015; Pericles (Lois Anderson) in 2016. In 2018, Bard on the Beach produced Macbeth (Chris Abraham), As You Like It adapted for an hilarious 1960s hippy setting, with appropriate songs from the Beatles, (Daryl Cloran), Timon of Athens with an all-female cast (Meg Roe), and Lysistrata (Lois Anderson). 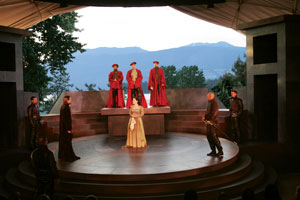 Bard on the Beach Shakespeare Festivals 30th season ran from June 5 to Sept 21, 2019. On the BMO Mainstage, The Taming of the Shrew, inspired by Bards 2007 hilarious Wild West production, played in repertory with the Elizabethan-era romantic comedy, Shakespeare in Love. On the Howard Family Stage, there were two new innovative productions of Shakespeare's works: Shakespeares Alls Well That Ends Well, set in India and featuring South-Asian music and dance; and Coriolanus, a brutal political tragedy with contemporary relevance. Both the 2020 and 2021 seasons were cancelled, when the Covid-19 pandemic closed theatre spaces in Canada and around the world.

Bard on the Beach also offers many ancillary activities, including opera concerts, speciality workshops, lectures, and forums. The tented "Bard Village" provides patrons with a range of activities and services, including informal In a Nutshell talks.

Bard also hosts the popular Young Shakespeareans Workshops for youth and teens at the site during the summer, and Bard in the Classroom Workshops for students during the school term. The Bard Lab, established in 2015, supports new works or adaptations of work relating to or inspired by Shakespeare's plays.