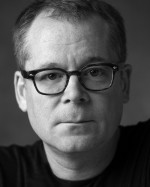 Quebec-based actor/director known for his lyrical productions of works from the Quebec and world repertories.

Among his works are two adaptations of novels by Réjean Ducharme, A quelle heur on meurt? and the very well-received La Fille de Christophe Colomb, which was performed at the Théâtre d'Aujourd'hui as well as in France, Switzerland, Martinique and Guadeloupe.

In the early 1990s, Martin Faucher made his mark in the world of dance, collaborating with noted choreographers such as Daniel Léveillé, Harold Rhéaume and Catherine Tardif.

He has directed children's theatre, notably La Bonne femme, for which he won an award in 1996 at the Masques Awards.

He has staged works by many of Quebec's emerging or established playwrights, notably Michel Marc Bouchard, René-Daniel Dubois and Carole Fréchette - his 1998 production of her Les Quatre morts de Marie was a surprise hit of the Montreal season.

Martin Faucher was president of the Conseil Québécois du Théâtre from 2005-2009, and a teacher in theatre schools. From 2015 to 2021, he has been Artistic Director of the Festival TransAmériques. He opened his first year as AD, with Dancing Grandmothers by South Korean choreographer Eun-Me Ahn, in which a dozen grandmothers and nine young performers danced with festive joy, and invited the audience onstage to participate.

In 2018, Faucher received the Prix Gascon-Thomas from the National Theatre School of Canada.