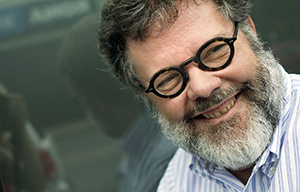 Paul Lefebvre studied at the Université de Montréal and then taught contemporary Quebec drama and playwriting. He has been an arts broadcaster, and served as drama critic for the Montreal daily, Le Devoir. He has also been on the editorial board of the theatre magazine, Jeu, and was on the first executive of the Association québécoise des critiques de théâtre.

He was the coordinator for the experimental hall of the Nouvelle Compagnie Théâtrale / Théâtre Denise-Pelletier (Salle Fred-Barry) and became literary director there. He works as a translator as well, turning in a stunning reading of Frank Wedekind's Lulu, performed at the Théâtre du Nouveau Monde in 1996, directed by Denis Marleau and featuring Sylvie Drapeau in the title role.

In April, 2001, he decided to leave the Théâtre Denise-Pelletier and took the position of assistant to the artistic director, Denis Marleau, at the National Arts Centre.