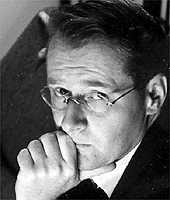 Edmonton, Alberta-based playwright/director/producer, Stewart Lemoine was born in Winnipeg in 1960. His father was a Hudsons Bay store manager, and during his childhood, he relocated frequently to small towns in northern Manitoba, such as Cross Lake and Nelson House. He attended the University of Alberta, and studied English literature.

Lemoine has created over seventy works during a career that has spanned four decades for his company Teatro La Quindicina. He co-wrote his first play, All These Heels for the Edmonton Fringe Festival in 1982, and has written a new play annually every summer, as well as two plays for Teatro during the season, staged at the Varscona Theatre, Edmonton (with some exceptions; i.e: Anatol 1998). He also founded a young people's company, Teatro Bambino, to perform his plays.

In 2015, Lemoine premiered St. Albert, a fantastical interpretation of the history of the community a few kilometres north of Edmonton, in which a realtor discovers Saint Albert (played by Jeff Haslam), relocated from the 13th century, in the pricey mansion she is trying to sell to a newly minted rock star.

To celebrate the opening of the New Varscona Theatre in 2016, Lemoine wrote For the Love of Cynthia, in which a small town in Alberta operating as a kingdom, functions as a metonym for imaginative creation (starring Ron Pederson as a wacky and irrepressible monarch).

In July 2017, Teatro premiered Lemoine's I Heard About Your Murder, an hilarious murder-mystery set in an isolated cabin located between Radium Hot Springs and Golden in British Columbia. Complications rapidly escalate as the owner, a "conference researcher," returns early from yet another conference with a flight attendant for an assignation, to discover the cabin already occupied by his brother-in-law. His wife arrives shortly afterwards with a realtor with plans to sell the cabin. Bear spray functions as a defensive weapon against yet another unannounced intruder, the purported "murderer."

The Finest of Strangers premiered in June 2018, an ambitious genre-bending production, featuring eight members of the Teatro ensemble. A headline newscaster (Jeff Haslam) returns to his childhood home in High River on a purported assignment, and discovers that he cannot leave. He is visited by ghosts from the past, including his mother, and learns more than he had anticipated, with the empathetic guidance of the current occupant, an English teacher.

Two musicals, The Hoof and Mouth Advantage and Angels on Horseback were co-written with Jocelyn Ahlf. In 2008 Lemoine created a revised libretto and dialogue for the Edmonton Opera's production of H.M.S. Pinafore.

At the Varscona Theatre he has produced a nationally acclaimed improvised soap opera, Die-Nasty, which plays every Monday evening during the season for 27 years.

Three of Lemoines plays, Shockers Delight!, Pith!, and The Margin of the Sky are published in A Teatro Trilogy: Selected Plays, NeWest Press, 2004. At the Zenith of the Empire is also published by NeWest (2007). A second trilogy of plays entitled Witness to a Conga and Other Plays was published by NeWest in 2011. The Exquisite Hour is included in The Alberta Advantage: An Anthology of Plays (Playwrights Canada Press, 2008).

The Exquisite Hour is a funny, poignant vignette which offers an insightful, moving speculation into the meaning and value of time, through the development of a relationship between a lonely, introverted bachelor, and an imaginative, determined young woman who arrives in his garden one evening, purportedly to sell him encyclopedias. She offers him the question: "Are you satisfied with what you know"? and then proceeds to show him just how to exercise his potential for intellectual and emotional exploration. The play was reprised by Teatro at the Varscona in Edmonton in 2007 with the same cast (Jeff Haslam and Kate Ryan), and again in 2013 with Belinda Cornish. It sold out multiple performances and was a shortlisted for the Pick of the Fringe, Georgia Straight Critics Choice Award, and the Cultchivating the Fringe Award for the 2010 Vancouver Fringe Festival. In 2012, it was produced by The Theatre Department at Factory Theatre's Studio space, with Daniella Vlaskalic and Ted Dykstra (dir. Ron Pederson).

Lemoine has been a playwriting instructor for adults and children, and has created new works with acting students at the University of Alberta, MacEwan University in Edmonton and Notre Dame High School in Red Deer, performed at the 2010 Edinburgh Fringe. 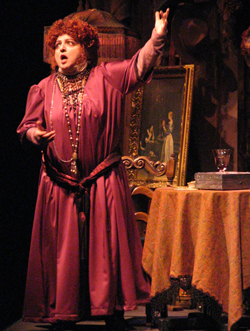 Lemoine's plays are highly imaginative, witty comedies, often combining exotic locales with quirky characters. The dialogue is whimsical and wise, the plots fantastical, the themes philosophical. Some are contemporary fairy tales for adults, which juxtapose the strange and the familiar; others are "screwball comedies" in which the least likely combination of events and characters create and resolve havoc on the stage; and some are more contemplative and often deeply moving examinations of relationships gone awry. Recently they are more focused on local stories, in terms of Edmonton's theatrical and musical history. Because they are written for Teatro La Quindicina, they draw on the considerable talents of company actors such as Jeff Haslam, Davina Stewart, Cathy Derkach, Julien Arnold, Leona Brausen, Sherry Somerville, Josh Dean, Ron Pederson, Belinda Cornish, Shannon Blanchet, Mat Busby, Andrew MacDonald-Smith, and Jenny McKillop. 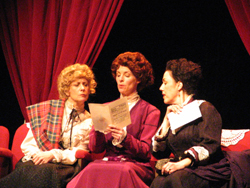 At the Zenith of the Empire L. to R. Coralie Cairns, Davina Stewart, Sheri Somerville