Alberta-based playwright, actor, producer and designer born in Winnipeg, Manitoba, July 11, 1960. He graduated from the University of Alberta with a B.Ed. where he also studied stage design.

He has written over fifty plays which have been presented across Canada, as well as in England, Northern Ireland, the United States, India, Ghana, and Brazil. His first play, Swordplay (1990) was the first of thirty works to be premiered, each year, at the Edmonton Fringe Festival (See Fringe Movement).

From 1995 to March 2017, he was playwright-in-residence for Shadow Theatre. He has performed with Theatresports and acted in Die-Nasty, a weekly, live soap opera which has been running for over twenty years. As an actor he has also appeared in the Edmonton International Fringe Festival, and on stages in Edmonton (e.g. Tom Stoppard's Rough Crossing at the Varscona Theatre in 1999). He has directed Die-Nasty's annual Soap-a-thon which runs 52 consecutive hours at the Varscona Theatre. He also serves as the Edmonton Liaison for the Alberta Playwrights Network.

The Minor Keys is published by NeWest Press (2000). The Red King's Dream is published in The Alberta Advantage: An Anthology of Plays, Playwrights Canada Press, 2008. Both That Darn Plot and Blackpool and Parrish are published by Samuel French. Belke was the recipient of the Samuel French Inc. Canadian Playwrights Award for That Darn Plot in 2000. In 2004 he received the City of Edmontons Salute to Excellence Award for Artistic Achievement.

David Belke has been called by Edmonton's Vue magazine "one of the most accomplished playwrights in [the city]. His comedies sympathetically scrutinize the foibles of human nature, and often have a strong moral underpinning which informs the confusions of his characters. His familiarity with and love for Shakespeare are apparent in his satiric spoofs on the complexities and absurdities of Shakespeare's plots and characters: in The Maltese Bodkin the characters from Richard III are transplanted to a 'B-movie' private-eye scenario. Belke has written two 'apocalypse' plays: Blackpool and Parrish, in which personifications of good and evil play a game of chess to determine the fate of humanity; and Riders of the Apocalypse (The Reunion Tour), a sequel in which Death has some reservations about her profession. In Another Two Hander or Two Belke turns a rehearsal of Bernard Shaws Village Wooing into a comedy which replicates the confusions of Shaw's characters. In That Darn Plot, a playwright is haunted by the characters he has created from his personal life as he struggles to write one more play. Ten Times Two tracks a relationship through 500 years of encounters. 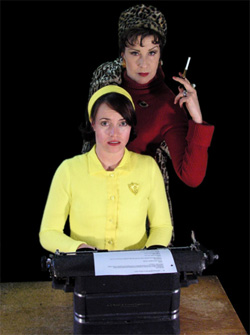 In The Science of Disconnection, with music by Darrin Hagen, Austrian physicist, Dr. Lise Meitner, replays her discovery of nuclear fission and her personal and professional struggles as the first woman to be accepted into the Kaiser Wilhelm Institute in Berlin before WWI. She also struggles to understand the nature of her relationship with chemist, Dr. Otto Hahn, who worked with her, enabled her escape from Nazi Germany, and then betrayed her when he accepted a Nobel Peace prize without acknowledging her seminal contribution. Belke's portrait of a shy, introverted individual, impassioned by her work, is an historical variation of his insecure but imaginative protagonists. The Science of Disconnection won a Sterling Award for best new play in 2010, and Kathy Derkach won a Sterling for her outstanding performance as Lise Meitner.

Next Year's Man of Steel explores the concept of heroism through the attempts of an artist and a writer to create a comic book super hero for an impecunious publisher eager to cash in on the 1940s fad. In the process, and with the imaginative and complicating intervention of the artist's wife, Belke's play cleverly provides an example of everyday heroism. It also demonstrates the collaborative nature of creativity. It is published by Samuel French.

For the 2011 Edmonton Fringe Festival, Belke wrote two new plays, both performed in Holy Trinity Anglican Church: Forsooth, My Lovely features the detective Birnam Wood, the protagonist of his 2001 murder-mystery, The Maltese Bodkin. In this hilarious spoof of the B-movie genre, many of Shakespeare's characters take on ironically appropriate roles as Birnam Wood attempts to unravel a skein of nefarious deeds. In Alexis Anybody?, his third play written specifically to be performed in the church sanctuary, two sisters battle over a baby's name, while the newly graduated seminary placement attempts to establish a truce.

For the 2012 Fringe, he remounted his jazz play, The Minor Keys and wrote and directed a new work, Von Mitterbrink's Second, in which two Viennese nobles from the 18th century duel for the attention of a fair maiden, who appears as the "second" to Von Mitterbrink, and proceeds to provide dueling instructions to the frustration of the combatants.

The 2014 Fringe marked Belke's 25th consecutive year of premieres, with the launching of One Last Time at the Well of Stories, featuring a university writer-in-residence who is stalled in his creative process, and finds his muses in a former lover and a barrista with an M.A. in Classical Literature. Belke also reprised his first work, Swordplay as a musical, with music by Darrin Hagen.

Belke's new play for the 2015 Edmonton Fringe, Allure, examined the early career of Hedy Lamarr (Keisler) in Germany before WWII, when she desperately attempted to leave the country and the contraints of a marriage with an arms manufacturer who was equipping the Nazis. Belke also reprised the Apocalyptic morality play, Blackpool and Parrish.

For the 2016 Fringe, Belke wrote The Hesitation Pitch about two farm girls aspiring to baseball greatness during the Depression, coached by a mysterious American pitcher from the "Negro League" who arrives by accident in their community. The play balances optimism and pessimism in the form of the girls' storekeeper father and a drifter with a black sense of humour, in the style of W.O. Mitchell.