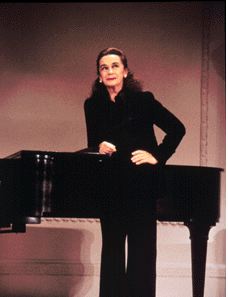 Internationally renowned actor/director born in Hawthorn, Victoria, Australia in 1933; died February 2020 of Parkinson's Disease in Pound Ridge, New York State. Zoe Caldwell was educated in Melbourne, leaving school at the age of fifteen. She first appeared on the stage in Peter Pan at the age of nine, and in her teens presented a radio program for children. In 1953 she played the title role in Colombe with Melbourne Universitys Union Theatre Repertory Company. She then joined the newly formed Elizabethan Theatre Trust and in 1958 received a scholarship to travel to Britain to work at the Stratford Memorial Theatre. She also performed at Londons Royal Court Theatre before she emigrated to Canada in 1961.

Zoe Caldwell played to great success at the Stratford Festival (Rosaline in Shakespeare 's Love's Labour's Lost, and also as Sonja Downfahl in Donald Jack's The Canvas Barricade, which was the first Canadian play performed on the main stage at Stratford and which won the Globe & Mail's play competition that year). Also in 1961 she appeared as Pegeen Mike in Playboy of the Western World at the Manitoba Theatre Centre. She toured with the Canadian Players in 1963, and in 1964 starred in A Far Country by Henry Denker at the Crest Theatre. In 1966 she performed at the Shaw Festival in The Apple Cart and Misalliance. She returned to Stratford in 1967 to perform in Antony and Cleopatra opposite Christopher Plummer, as Lady Anne in Richard III and as Mistress Page in The Merry Wives of Windsor. She has also directed a 1979 Stratford production of Richard II.

Her Broadway debut was in 1965 in John Whitings The Devils. Caldwell has won four Tony Awards for her Broadway roles in Tennessee Williams Slapstick Tragedy , The Prime of Miss Jean Brodie (1968), Medea (1982), and as Maria Callas in Master Class (1995). She has also directed productions of Othello with James Earl Jones and Christopher Plummer in 1981, a 1988 production of Macbeth with Christopher Plummer and Glenda Jackson, and a 1994 production of Vita and Virginia with Eileen Atkins and Vanessa Redgrave in 1994.

In the 1960s and 70s she appeared on American television in classical roles, and for the CBC she played Old Lady Floyd in The Road to Avonlea. She has also appeared in film: in Woody Allens The Purple Rose of Cairo in 1985, as a cartoon characters voice in the Disney film, Lilo and Stitch, and in Birth (2004).

Her performances were characterized by emotional power, and by a distinctive husky voice. In his memoir, In Spite of Myself (2008) Christopher Plummer lauds Caldwell's portrayal of Cleopatra at Stratford: "There is no question Zoe had the voice for it - a voice whose four-octave range could summon up an incredible variety of tones, from the deep cello notes to the violin's high-pitched whines. Her movements were liquid, sinuous as a snake and in her grief she swayed like a palm tree in a hurricane" (p. 455).

Her many awards include and OBE in 1970 for Services to the Theatre, the 1998 John Gielgud Award, the 1998 Linda Wilson Lifetime Achievement Award for Excellence in the Theatre, and four Tony Awards. She held the Eminent Scholar Chair at Florida State University, and received an Honorary Degree from the University of Melbourne in 2003.

She was married to Canadian-born Broadway producer Robert Whitehead until his death in 2002, and she had two sons. In 2001 she published a memoir entitled I Will be Cleopatra: An Actresss Journey (Norton).