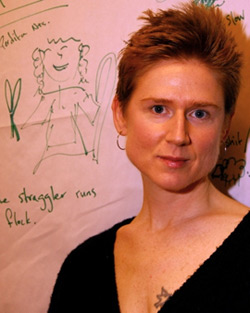 Playwright, performer, producer, and filmmaker, born in Whitehorse Yukon. She is a graduate of the National Theatre School of Canada (Playwriting '95). Her plays include: Choke my Heart, her only customer, Hitching a Ride, Last Stop for Miles, Walk Right Up, (2001, Stratford Festival, Studio Theatre), What a Cad!, and So Many Doors (Sour Brides, Nakai Theatre, Yukon Arts Centre 2007, dir. Kelly Thornton). So Many Doors was remounted at the Magnetic North Theatre Festival in 2008 in Vancouver. It examines the ways in which two couples respond to the deaths of their young children  through group engagement, or denial  and the consequences to their marriages and their relationship as former friends attempting a reconciliation. It is published by Playwrights Canada Press (2010).

She has participated in Playwrights' Workshop Montreal (1999), the Writer's Lab at Factory Theatre (2001-2004) and the Groundswell Playwrights Unit at Nightwood Theatre (2004). In 2004, she co-founded Sour Brides Theatre with Moira Sauer in Whitehorse, where she currently lives.