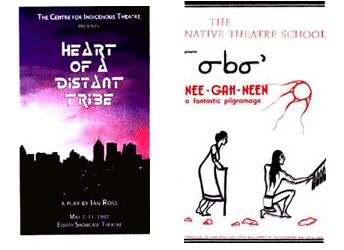 Educational institution in Toronto, Ontario, which provides training, education, networking and positive role modelling in the field of theatre as well as film, television for persons of First Nations ancestry.

Its origins are in the Association for Native Development in the Performing and Visual Arts (ANDPVA) founded by James Buller in 1972, to support to Canadian Aboriginal artists in Ontario and around the world, and "to demonstrate the rich traditional heritage of Aboriginal people and to ensure that Aboriginal art was recognized as contributing to the cultural fabric of Canadian society." (ANDPVA, 2009, quoted in Foster, Cultural Climate Change). Following a Native Arts Festival in Niagara-on-the-Lake 1975, ANDPVA offered a training program for young people in a Summer Theatre School, with instructors Gary Farmer and David Calderisi. Following Buller's death in 1982, Farmer continued the Native Theatre School, with instructors from the Indigenous community, including Oneida actor and former Trent University student Norman Charles and his partner, Saami actress Asa Simma. The Theatre School combined western theatre training with Indigenous teachings. The name was changed in 1994.

In 1998, the Centre launched a school which provided more advanced training than could be provided by its summer program. It currently offers a three and four-year programs, and summer programs in Peterborough, Ontario, and Lethbridge, Alberta.

The Centre also confers the James Buller Award to individuals and organizations across the continent who contribute to the vision of Indigenous community theatre.

The Centre is funded by all levels of government as well as by the Miziwe Biik Aboriginal Management Board, The McLean Foundation, Molson Companies Donation Fund and the Toronto Blue Jays.

Among instructors/directors at the Centre have been Tomson Highway, David Calderisi, August Schellenberg, Paul Thompson and Drew Hayden Taylor.