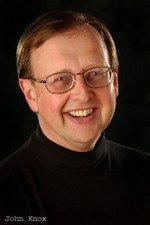 Playwright, novelist, and columnist, based in Ontario, the son of veteran actor William Needles, and Toronto theatre practitioner Dorothy Goulding, brother of Jane Needles. He grew up on a family farm near Rosemont and in Toronto. After university, he worked as editor of the local newspaper in Shelburne where he created the character of Walt Wingfield, the stockbroker turned farmer who wrote about his adventures on the farm in a series of weekly letters to the editor. In 1985, Dan Needles drew from these columns to write his first play, Letter from Wingfield Farm, in which one actor plays all the characters. Over the next twenty-five years, he wrote six more solo plays about the rural adventures of his protagonsit: Wingfield's Progress (1987), in which Walt leads a protest against developers; Wingfield's Folly (1990), in which he engages in a disastrous economic experiment and finds love; Wingfield Unbound (1997), in which he promotes country culture; Wingfield On Ice (2001), in which he helps the community survive an ice storm; Wingfield's Inferno (2005), in which the community responds to the burning of the Orange Hall; and Wingfield Lost and Found (2010), in which a search for water takes on global significance. With Rod Beattie in the title role, and directed by his brother Doug Beattie, these plays have toured across Canada, in major cities and small communities.

Dan Needles latest book is a novelization of Wingfield plays four, five and six, entitled Wingfield's Hope, a sequel to the book version of the first three Wingfield plays, called Letters from Wingfield Farm. Both were short-listed for the Leacock Medal in 1989 and 2005 respectively.

His play, The Perils of Persephone, premiered at the Blyth Festival in 1989. The Team on the Hill premiered at Theatre Orangeville in 2013. A father and son differ on the ways in which the family farm must change in order to survive. It was produced at the Blyth Festival in 2019, with Layne Coleman as the grandfather who had similar differences of opinion with his son (dir. Severn Thompson).

Dan Needles is a winner of the Stephen Leacock Memorial Medal for Humour, and is a Member of the Order of Canada.