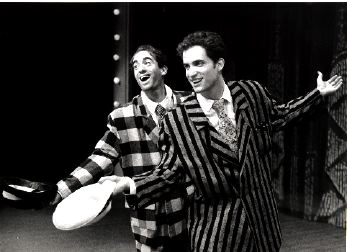 On 2nd Avenue, 1998, a production of the Yiddish Theatre, the house that Dora built.

Actor/director/playwright and founder and artistic director of the Yiddish Theatre in Montreal, Quebec. Dora Goldfarb was born in Zhitomir, the Ukraine, in 1920. She died in Montreal, December 2003 at the age of 84.

She trained at the Yiddish Art Theatre in Moscow, and performed with the Kiev State Theatre during WWII. She subsequently worked in Kazakhstan, touring with a troupe to Uzbekistan and Tadzhikistan. After the war, she and her husband, Sam, found themselves in a Displaced Persons (DP) camp where they discovered that virtually all of both of their families in Poland had been wiped out by the Nazis. Wasserman continued to do theatre, entertaining in the transit and DP camps.

She came to Canada in 1950 with her husband and two daughters, and soon, with the help of Gratien Gélinas among others, she established the Yiddish Theatre which she led with great success until suffering a stroke in 1995. Her daughter, Bryna Wasserman, is now leading the company.

She produced or directed more than seventy plays for the Yiddish Theatre over four decades, including adaptations of the novels of Isaac Bashevis Singer, and Yiddish translations of Michel Tremblay's Les Belles-soeurs. She toured the company in Israel, the United States, Austria and Russia. She was one of the most beloved figures on the Montreal theatre scene.