The mandate is to collectively create original, innovative work through visual spectacle, imaginative narrative, and non-traditional staging, which focuses on the role played by new technology in the lives of individuals and society. The Company sponsors workshops for youth, apprenticeships, and mentorships, and has active affiliations with other independent theatre groups, such as Neworld Theatre to jointly develop and produce plays. Its new works often tour to theatres across the country.

Productions include: Brilliant! The Blinding Enlightenment of Nikola Tesla (Vancouver Fringe Festival 1996), about the American inventor of alternating current in the early twentieth century, and enacting the attraction and the dangers of modern technology, the human impulse to create, and the often consequent isolation of genius. It was then produced at the High Performance Rodeo, Calgary in 1999, Firehall Arts Centre, Vancouver in 2003, the Edinburgh Fringe in 2003, Western Canada Theatre Company, Kamloops in 2003, the Magnetic North Theatre Festival, Edmonton, 2004, and the National Arts Centre, 2006.

The Flannigan Affair is a thirteen-minute experiment for audiences of twelve by a company of six, and is available on-line via the theatre website. Palace Grand is a vaudevillian investigation into the unmapped wilderness of creation and imagination (website), written and performed by Jonathon Young (Vancouver East Cultural Centre 2004, PuSh International Performing Arts Festival 2008). The One That Got Away by Kendra Fanconi is based on the life of her Jewish grandfather, playing for a perambulating audience in a set submerged in water. Dona Flor and Her Two Husbands is set during the Brazil Carnival in 1940. The audience relocates from the theatre to a beer hall to experience the protagonists sensual transformation. The Score explores the world of genetics. Flop portrays the failed construction of a dream home. The Fall (2003) is set in 1950 in an abandoned factory, and explores the function of the scapegoat in society. It won six Jessie Richardson Awards, including for outstanding production. The Wake takes place in eleven outdoor venues on Granville Island, and chronicles the history of three generations of a family as the landscape changes from a Native fishing camp to an industrial hub. 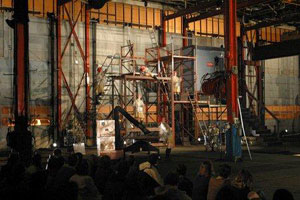 The Fall. Photo by Tim Matheson.

The Company has re-interpreted No Exit -- the absurdist play by Jean Paul Sartre, in which three deceased strangers are trapped in a hotel room and make life hell for each other -- as a staged film. It won a Jessie Richardson Award for outstanding production by a small theatre in 2009, and was subsequently produced by Western Canada Theatre Company, Nightwood Theatre, and One Yellow Rabbit at the High Performance Rodeo in Calgary. Studies in Motion: The Hauntings of Eadweard Muybridge by Kevin Kerr presents the bizarre story of the nineteenth-century photographer, obsessed by the desire to capture physical movement on film, and considered by some the father of cinema. He was also the suspected murderer of his wifes lover. The production breaks down movement and time through stroboscopic effects. It was produced at Festival TransAmériques in May 2009 to critical acclaim, and subsequently produced at the Citadel Theatrein November 2010.

Tear the Curtain! by Kevin Kerr and Jonathan Young, directed by Kim Collier (Arts Club Theatre at the Stanley Industrial Alliance Stage 2010) is a hybrid film/theatre creation that exploits the machinations of B-movie film villains in a 1930s Vancouver setting to explore the ways in which an author/movie critic moves between illusion and reality.

In June 2012, the Company produced You are Very Star, a multimedia experience in the H.R. MacMillan Space Centre, which time-travels back to 1968 and ahead to 2048, from the height of the Space Race to the dawn of a new humanity. The audience encountered the production on-line, through social media, as a site-specific treasure hunt and as live theatre inside the planetarium.

Betroffenheit (German for "consternation") was developed by Jonathon Young and Crystal Pite in 2015 and opened at Canadian Stage during the Pan-Am Games. Through dance and language, it enacts the emotional trauma experienced by Young when his fourteen-year-old daughter died in a cabin fire. It has subsequently been performed at the National Arts Centre (2018).

In April 2018, the Company launches 40 Days and 40 Nights by Daniel Brooks and Kim Collier, a ritualized performance of enduring love, enacted by Brooks and Collier.

In 2019, Brooks and Collier's ambitious multi-media work, The Full Light of Day premiered at the reopened Vancouver Playhouse. It interrogates the disastrous consequences of greed and corruption on a family, when the patriarch, an urban developer, colludes with gangsters, and his dying wife attempts to come to terms with this personal and social betrayal.

In August, 2021, after the Covid-19 pandemic had closed theatres across Canada and around the world for over a year, Electric Company, Innovation Lighting, and Presentation House Theatre premiered The Magic Hour, an in-person immersive, walk-through experience by director Kim Collier and playwright Kendra Fanconi: "a light-charged story of finding beauty in small moments and possibility within domestic isolation."

The Electric Company is based in a 6,000 square foot studio called Progress Lab 1422 (PL1422), in the Commercial Drive area of Vancouver, Canada. Launched in 2009 with Boca del Lupo, Rumble Theatre, and Neworld Theatre, PL1422 is a hub for independent theatre creation in Western Canada.

The Electric Company has won twenty-four Jessie Awards including four for best production, two for original script, and others in direction, design, acting, and artistic achievement. In 2001, it was awarded the Alcan Performing Arts Award of $50,000 for the creation of a new work.