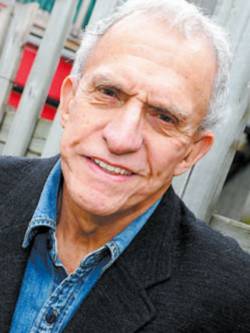 Magnificent character actor born in Montreal, Quebec in 1930; died October 26, 2020 of heart failure at the age of 90 in Montreal.

Jacques Godin began his studies in theatre at the school of the Théâtre du Nouveau Monde/TNM, subsequently appearing in over sixty plays in Quebec and Ontario theatres, including Théâtre de L'Égrégore, TNM, Nouvelle Compagnie Théâtrale / Théâtre Denise-Pelletier, and in the famous Stratford Festival production of Henry V, which featured francophone actors in the roles of Frenchmen (1956).

He also worked in radio and television, and had a solid career in film (including the film version of Being at Home With Claude).

Jacques Godin's performances were marked by an electric stage presence and a remarkable ability to veer from unnerving strength to heartbreaking vulnerability.

In June 2017, he was made a knight in the Ordre national du Québec.