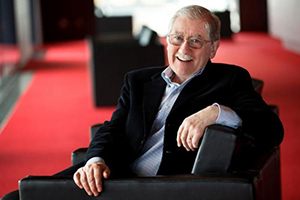 Irish-born director (1948), Joe Dowling has enjoyed an international career. He was long been associated with the Abbey Theatre, Irelands national theatre - initially in the acting company. He later founded the first Irish theatre-in-education group, the Young Abbey. In 1974 he was named artistic director of the Peacock Theatre, the Abbeys second stage. In 1978, at age 29, Dowling became the youngest artistic director in the Abbeys history. During his seven-year term, he encouraged the development of new plays and young playwrights, and worked with established Irish playwrights such as Brian Friel, Hugh Leonard and Frank McGuiness. In 1985, Dowling assumed the position of managing and artistic director of Dublins oldest commercial theatre, the Gaiety.

Since 1990, he has directed extensively in North America, with productions at Arena Stage, Long Wharf Theatre, The Public Theater, the Stratford Festival and the Shakespeare Theatre in Washington, D.C. From 1996 to 2015, he was Artistic Director of the Guthrie Theatre in Minneapolis.

In Canada, Dowling has directed at Centaur Theatre (Our Country's Good, Observe the Sons of Ulster Marching Towards the Somme, Juno and the Paycock); at the Stratford Festival (Uncle Vanya); and at the National Theatre School of Canada.