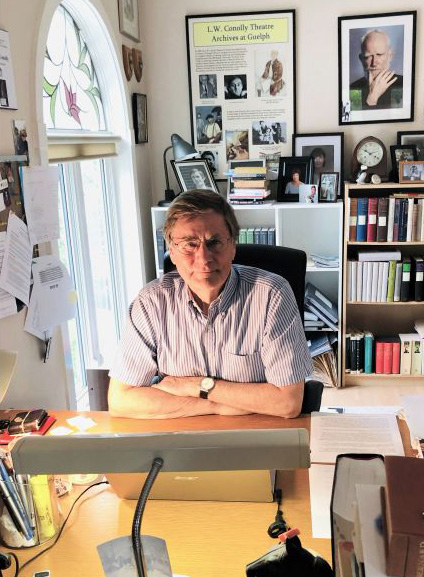 Leonard Conolly has authored over sixty articles and reviews for British and North American journals and twenty books. He was Professor of English at the Universities of Saskatoon, Alberta, and Guelph, and Trent University in Peterborough until his retirement in 2012. He was Associate Vice-President Academic and chairman of the Drama Department at the University of Guelph, and President and Vice-Chancellor at Trent from 1994-97.

Leonard Conolly served as the President of the Association for Canadian Theatre Research (1977-79), President of The World Encyclopedia of Contemporary Theatre (1989-93), and is General Editor for The Selected Correspondence of Bernard Shaw (U. of Toronto P, 2002).

He founded the Theatre Archives at the University of Guelph, the largest collection of Canadian theatre archives available, and one of the world's most important collections of Bernard Shaw material, which are named after him. He also co-founded the journals Essays in Theatre and Nineteenth Century Theatre.

In February, 2000, he was appointed a Corresponding Scholar of the Academy of the Shaw Festival, and in 2011 published a comprehensive illustrated history of the Festival (The Shaw Festival: The First Fifty Years, Oxford University Press).

Among his works (many of which have served as source for the Canadian Theatre Encyclopedia on the WWW) are: The Censorship of English Drama 1737-1824 (1976); English Drama and Theatre 1800-1900 (with J.P. Wearing, 1978); Theatrical Touring and Founding in North America (1982); Canadian Drama and the Critics (1987; revised 1996); English-Canadian Theatre (with Eugene Benson, 1987); Oxford Companion to Canadian Theatre (with Eugene Benson, 1989); Encyclopedia of Post-colonial Literatures in English; Vols. I-II (with Eugene Benson, 1994); A critical study of Bernard Shaw and Barry Jackson (2002), and Bernard Shaw and the BBC (U of Toronto P, 2009). He is currently writing a book called Bernard Shaw and America, a study of Shaws relationship with the United States, and is a co-editor for the Broadview Anthology of British Literature.

He was elected a Fellow of the Royal Society of Canada in 2002. In 2014 he was awarded the CATR/ACRT Lifetime Achievement Award for his significant contribution to Canadian Theatre Studies in championing the archival collection and preservation of the Canadian theatrical heritage.

He lives in the Chautauqua neighbourhood of Niagara-on-the-Lake with his wife of fifty-six years, Barbara Conolly.