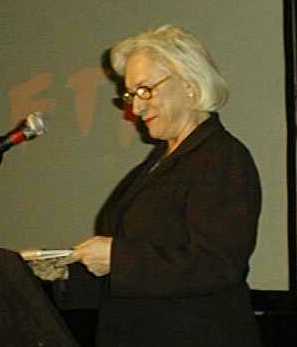 Marie-Hélène Falcon studied at the University of Montreal (philosophy and theatre) and became the Artistic Director of the Festival de théâtre étudiant du Québec and Director General of the Association québécoise du jeune théâtre.

In 1981 she collaborated in the second Festival de créations des femmes. In 1985, she co-founded, with Jacques Vézina, and became AD of the FTA which is now one of the world's most prestigious and well-attended theatre and dance festivals. Founded as a festival that would concentrate on Latin-American theatre (Mme Falcon received an award for helping showcase Latin-American works), the festival has become more international, with companies invited from all over the world and Canada.

She introduced Canadians to the works of Robert Wilson, the Wooster Group, Ariane Mnouchkine and Peter Sellars (this last to extreme and delightful controversy), and introduced the world to Gilles Maheu and his Carbone 14, to Robert Lepage, Wajdi Mouawad, Guillermo Verdecchia, Daniel Brooks, Daniel MacIvor, and Denis Marleau and his Théâtre Ubu. She stepped down as the head of FTA in 2014.

Marie-Hélène Falcon was named a Chevalier in the French Ordre des Arts et des Lettres, and became an Officer in the National Order of Quebec in 2003. She received the Denise Pelletier Performing Arts Award from the Government of Quebec in 2015.