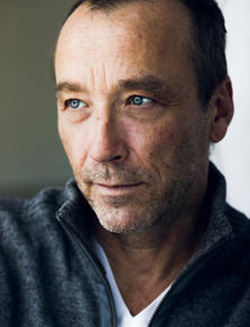 After graduating in 1989 from the Conservatoire d'art dramatique de Montréal, he went to London to study classical acting.

Since then, he has pursued a successful career in theatre and film, including acting in the premiere of Jean-Frédéric Messier's Le Dernier délire permis (touring with it to Ottawa, Paris, London and Belgium) and in Sophocles' Antigone at the Nouvelle Compagnie Théâtrale / Théâtre Denise-Pelletier.

He was also playwright in residence at the NCT and artistic director of Trans-Théâtre which has mounted his plays.

His works include: Accidents de parcours (1993, directed by the author and translated by Shelley Tepperman as Freak Accidents); Prise de sang (1995, the author); and the epic Exodes (1996, the author).

His recent creation, Le pensionnat was presented at Espace Libre in October 2008. He is also the co-creator of the Cabarets insupportables presented at Lion dOr in 2007, 2008 and 2010.