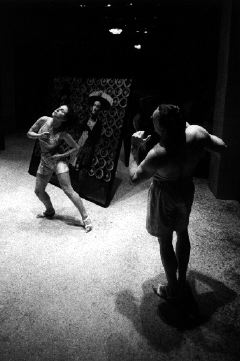 Choses vue à la halte, from Omnibus, 1996, directed by Jean Asselin among others

Company in Montreal, Quebec, founded in 1970 by Jean Asselin and Denise Boulanger as Mime Omnibus.

The company specializes in fusionist theatre with a strong base in highly disciplined mime and movement. Works range from reworkings of myths and Collective Creation to epic sagas. Among works the Company has toured or played in its home theatre Espace Libre are Zizi et la lettre, Dieu les conduit, Ils regardent autre chose, Choses vue à la halte, Ararat, Beautés divines, and Larry Tremblay's L'Amour a Trois in 2010.

The Company also conducts workshops for artists interested in its approach. Jean Asselin has remained as Artistic Director since its founding, producing over fifty works. Since the 2014-2015 season, artistic direction is shared by Asselin, Réal Bossé and Sylvie Moreau.