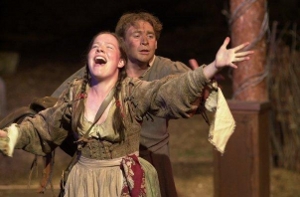 Jody Stevens and Lee Wilson as Phebe and Silvius in Resurgence Theatre's production of As You Like It (dir. Chris Abraham)

Resurgence Theatre Company was founded in 1999 by Lee Wilson, Anthony Leo and Matthew John Lundvall (all graduates of Ryerson Theatre School in 1998). Resurgence produced the York Shakespeare Festival in Newmarket, Ontario every summer. In 2002 it was hailed as one of the top five Shakespeare Festivals in Canada by The Globe and Mail. The Company's first show was A Midsummer Night's Dream (dir. Gordon McCall), followed by Twelfth Night (dir. Chris Abraham), As You Like It (dir. Chris Abraham), and Romeo & Juliet and The Tempest (dir. Chris Abraham) in 2002. Joseph Zielger directed Love's Labour's Lost in 2003.

Resurgence was the only professional repertory outdoor Shakespeare Festival in Ontario, with strong youth outreach and conservatory programs. As of 2013, Resurgence has no longer been in operation as a presenting professional theatre.