Shakespeare in the Ruins 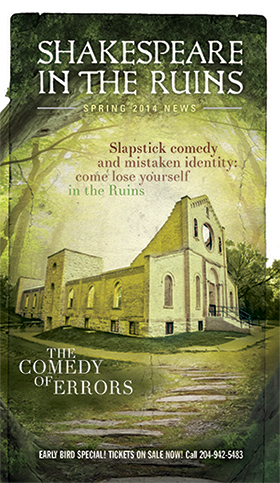 The annual June production of a play by Shakespeare takes place in the ruins of a Trappist Monastery on the outskirts of St. Norbert. Promenade performances incorporate the environment of the ruins; a mixture of contemporary and traditional styles with a strong textual orientation; minimalist production values; and multiple-role, cross-gender casting.

The first production in the ruins was Romeo and Juliet. In 2016, SIR produced Richard III with Debbie Patterson, who has multiple sclerosis, playing Richard (dir. Christopher Brauer). In 2021, when the Covid-19 pandemic closed theatres across Canada and the world, SIR launched a digital production of A Winter's Tale with Cercle Molière; and a digital production of Shakespeare's Will by Vern Thiessen, with Debbie Patterson performing in a wheelchair.