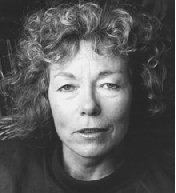 Socially engaged playwright born in Vancouver, British Columbia in 1950. She grew up in London, Ontario, studied political science at York University (Toronto), and joined the New Democratic Partys Waffle movement. She worked as a community health worker in Toronto, and in 1977 moved to Kenora as a Community Outreach worker with the Ontario Mental Health Association, becoming engaged in First Nations/White relations there for six months, before leaving in frustration over the bureaucracy. In 1979 she moved to Winnipeg where she became a radio broadcaster, returning to Kenora to cover the Boise Cascade paper mill strike for the CBC. She also recorded documentaries for the CBCs Our Native Land, and wrote her first play, On The Line (Agassiz Theatre, 1982) about a strike by immigrant women garment workers in Winnipeg.

Her first play to get attention was The Fighting Days ( Prairie Theatre Exchange , 1983, directed by Kim McCaw). It focuses on the women's suffrage movement in Winnipeg in terms of the conflict between journalist Francis Benyon and Nellie McClung, showing the latent racism and xenophobia which shadowed the movement during the First World War. It was produced by Workshop West Theatre in 1986, and at Manitoba Theatre Centre in 2012. 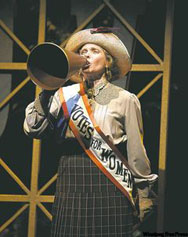 Lill's confessional monologue, The Occupation of Heather Rose (Prairie Theatre Exchange, 1986, dir. McCaw) draws on her experiences in Northern Ontario. A young idealistic nurse recalls her traumatic education in race relations while working alone in a small First Nations community which she occupies from a neo-colonial White point of view, but which in the end occupies her as an obsessive guilt. The play has been produced across the country and internationally, and adapted for radio.

In the duologue Memories of You (Prairie Theatre Exchange, 1988, dir. McCaw), Lill experiments with scene and structure to evoke the fluidity of memory. The play focuses on the life of Canadian writer Elizabeth Smart, whose career was eclipsed by that of her lover, British poet George Barker, but for whom she retained a desperate loyalty, while neglecting her own daughter. It was subsequently directed at Theatre New Brunswick by Sharon Pollock, whose own play, Doc it resembles.

She moved with her husband to Dartmouth Nova Scotia in 1987, where she wrote plays focusing on local stories. Sisters ( Ship's Company, 1989, dir. Mary Vingoe ) has two time periods - 1969 and 1950; it is set in a residential school for First Nations children run by nuns, speculating on the reasons why it was burned down.

All Fall Down (Alberta Theatre Projects, 1993, dir. Vingoe) examines the irrational and hysterical response of a community when a woman daycare worker is accused of sexually abusing a child.

Wendy Lill also successfully adapted Sheldon Curries novel The Glace Bay Miners' Museum into a radio and stage play (Eastern Front Theatre, 1995) that has been performed across the country. It shows the disastrous consequences of coal mining for a Cape Breton family, and the macabre response of a young woman who loses a father, two brothers and a husband in the mines.

Chimera (Tarragon Theatre 2007, dir. Vingoe) tackles the ethics of stem cell research and the limits of science and biotechnology in terms of a confrontation between a cynical journalist and the new Minister of Justice.

Messenger (HomeFirst Theatre in the Neptune Studio, dir. Vingoe) is inspired by Henrik Ibsen's An Enemy of the People. It tackles the issue of climate change during the 1990s, when it was first in the public consciousness. Supported by his wife, an impassioned, newly appointed minister of environment named Thomas Stockman devises a bold plan to address climate change, which is derailed by the interests of oil companies, and he becomes socially and politically isolated.

Wendy Lill has also written screenplays, including Ikwe -- about Metis women -- for the National Film Board series, Daughters of the Country, which won a Golden Sheaf Award in 1986.

In 1997 she became a Member of Parliament (NDP critic for Heritage and Culture and for Persons with Disabilities). She was re-elected in 2000 and served until 2004, when she was diagnosed with Multiple Sclerosis. Her CBC radio drama series, Backbenchers (2010, 2011) was based on her experiences in parliament.

She has been writer-in-residence at Mulgrave Road Theatre (1984) and Neptune Theatre (1991), and co-founded the Eastern Front Theatre in 1993 with Mary Vingoe and Gay Hauser.

Wendy Lill lives in Dartmouth, Nova Scotia, with her husband. They have two sons.