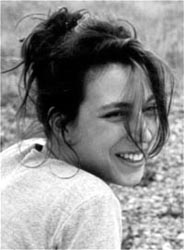 Playwright and actor, born in 1975, and based in Montreal Quebec. She graduated from the private Catholic college for girls, Villa Maria in 1992 and studied theatre at Ecole Michel-Granvale in Paris.

Her most popular work, Des fraises en janvier premiered at Théâtre d'Aujourd'hui in 1999, and was remounted by Compagnie Jean-Duceppe. It won a Masques Award for best original script in 2000. The English translation by Morwyn Brebner, Strawberries in January, premiered at playRites in Calgary in 2003. It has played across Canada and in England ; in Germany (in German) ; and in Scotland (in Scots) at the Edinburgh Festival in 2006. Set in a café in Montreal, it paints a whimsical portrait of four singles, one of whom is an aspiring filmmaker who casts the others in surprising roles.

Désordre public is set in a city bus, and portrays the frustration of a failed actor who hears all the thoughts of his fellow passengers. According to Louise Forsyth in her introduction to An Anthology of Quebec Womens Plays Vol. III (1997-2009), in which the play is published in English (trans. Morwyn Brebner), « The play explores the idea that a satisfying sense of identity and meaningful relations with others depends upon an incessantly changing and tenuous balance between honest self-awareness and genuine sympathy for others » (x). De la Chenelière won the Governor Generals Award for Désordre public in 2006.

Bashir Lazhar (Théâtre d'Aujourd'hui 2002) is the portrait of an Algerian immigrant who has lost his wife and children to an arson attack in his homeland, and who attempts to survive in Montreal by substitute teaching a dysfunctional grade 6 class, in which most of the students are also struggling with cultural difference and alienation. It was translated into English by Morwyn Brebner, and the Wishbone Theatre production directed by University of Alberta professor, Piet Defraeye, with Edmonton actor Michael Peng in the title role, has toured in Canada to sold-out houses, and throughout Europe, including Germany (Munich, Dresden), Austria (Innsbruck), Belgium (Antwerp), UK (London) and the Edinburgh International Festival. Michael Peng was nominated for Best Actor at the Edinburgh Fringe (2011, Excellence for the Stage Awards); and the production was also nominated for a Elizabeth Sterling Haynes Awards (Sterling Awards), 2010 for Best Director. Edmonton Journal critic Liz Nicholls writes: It's a powerful but delicate human portrait of the immigrant experience: dispossession, alienation and our own habits of intolerance. We meet a haunted man who's diffident but eager to please. And since we're a country of immigrants, refugees fom the multiple terrors of the world, we're confronted with ... our own selves" (7 Oct 2011). In 2011 the one-person play was expanded and adapted as a film entitled Monsieur Lazhar, directed by Philippe Falardeau, with de la Chenelière playing the part of the mother of one of the students. It won the City of Toronto Award for Best Canadian Film in 2011, and was nominated for an Oscar for Best Foreign Film. In 2012 it won a Genie for Best Canadian Motion Picture.

In 2009 Les Pied des Anges was produced at Espace Go (dir. Alice Ronfard), and LImposture at Théâtre du Nouveau Monde. Les Pieds des Anges explores the question posed by the protagonist, Marie, for her doctoral thesis: Why were angels suddenly provided with feet by Renaissance painters? Although her research is coloured by the suicide of her brother, the play does not succumb to grief, but aspires to life and joy. Ronfard maintains that de la Chenelière renders life's absurdities, without wallowing in tragedy or psychoanalysis (Voir interview).

To The Light (trans John Murrell, Alberta Theatre Projects 2017) is a poetic and haunting meditation on loss. It explores the friendship between two women who are drawn together and torn apart by the roles they have embraced as women in the early 20th century, one a mother and society wife, the other an ambitious but struggling career woman. It was inspired by Virginia Woolfs 1927 novel To The Lighthouse.

Her plays are published in French by Fides and Leméac. Strawberries in January is published in English by Playwrights Canada Press.