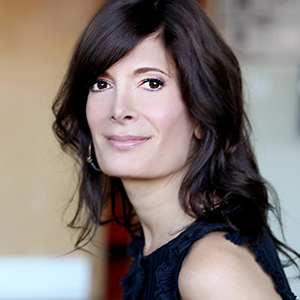 She then worked extensively with Robert Lepage: as Lady Capulet in Roméo et Juliette (Nightcap Productions); and in Macbeth, Coriolan, and The Tempest (1992-93), which toured internationally, as did Lepage's Les Sept Branches de la rivière Ota (1994-97).

In 1994, she performed in and directed her own work, La Nuit (Théâtre de la Vieille), a dark and disturbing play that explores violence.

Cadieux then performed in the acclaimed production of Heinar Müller's Quartett at Espace Go, directed by Brigitte Haentjens in 1996. She worked again with Haentjens at Théâtre du Nouveau Monde/TNM in 1999 in Marie Stuart; in 2000, at Espace Go in Électre, and again at Espace Go, in May 2001, in Mademoiselle Julie.

Anne-Marie Cadieux and Marc Béland in the stunning production of Heiner Müller's Quartett at Espace Go in 1996, directed by Brigitte Haentjens

Cadieux has had a solid career in film as well (notably in the films of Robert Lepage).

Her sister, renowned artist Geneviève, is one of the favourite models for her work: "In Geneviève's images or in my work in cinema or theatre, we must show an intimate part of ourselves. Creation is intimacy revealed to the public" (Voir 31 March, 2000).

She lives in Montreal.