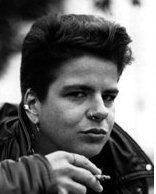 Audrey Butler before she became Alec Butler in 1999

Playwright born on Cape Breton Island, Nova Scotia, of Mi'kmaq and French/Irish descent. She/he began her life as a woman (Audrey Butler) but in 1999 completed gender reassignment and changed her first name to Alec.

Butler is co-artistic director of Temperamental Journey, a playwright-centred company devoted to creating provocative and entertaining theatre in the spirit of social change and artistic excellence.

The Globe and Mail has called Audrey Butler a "lesbian [sic] punk iconoclast."

He has had many of his plays published in journals. His work Radical Perversions: 2 Dyke Plays, was published in 1990 by Women's Press. He was also a finalist for the Governor Generals Award 1990 for Black Friday?.