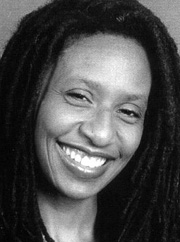 Director, dramaturge, actor, playwright, born in Surrey, England, who has worked across Canada, the United States, Britain, Europe, and the Caribbean for the past twenty-five years. She has a special interest in feminist, social action, and intercultural theatre.

Diane Roberts has a BA in Theatre (York University, 1988) and an MFA in Playmaking (York U, 1998). Recently, she has been pursuing a PhD in the Fine Arts Interdisciplinary HUMA program at Concordia University. Her PhD research centres "on the praxis of embodied decolonisation in contemporary performance".

She has directed productions for

Diane Roberts current passion is the exploration and practice African and diasporic forms of theatre in a New World context. The Arrivals Project: A Personal Legacy Workshop Series brings together First Nations and minority artists in a creative collaboration of traditional and contemporary stories, dance, music, and installations.