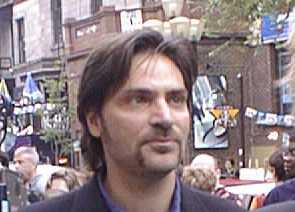 In April 1999, he performed in Espace Go's production of Le Roi se meurt/Exit the King (directed by Dubois); and in January 2001, the premiere of Danis' Le Langue-à-langue des chiens de roche (Théâtre dAujourdhui).

Jean-François Pichette's performances are marked by his magnificently expressive face and a willingness to present extreme vulnerability.