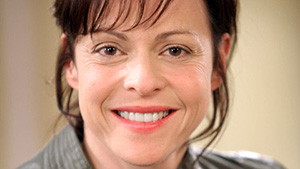 In 1998 she was nominated for a Masque Award for her performance in the premiere of Serge Boucher's Motel Hélène, a portrayal of such vibrancy, detail and emotion that it will long be remembered by those who saw it. In 1999, she won the Masque for best supporting female actor for Le Libertin.

More recently, she reprised the role of Pierrette in Les Belles-soeurs at the Monument National (2013). She loves Michel Tremblay's works, because of their strong portraits of women.

Maude Guérin has also had a successful career in television.

She told Voir (Montreal) in 1999, "I don't get emotional easily. For instance, it's rare that I'll cry in front of friends or colleagues. I'm more reserved in life than in theatre. I sometimes have the impression that I live more on stage than in life...scary, isn't it?"