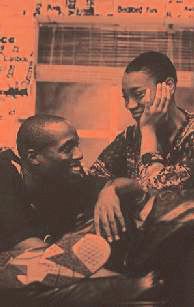 The work takes place in Toronto during the infamous riots in Los Angeles around the release of the policemen who had been accused of beating Rodney King. We follow the conversations of six African-Canadian roommates as they discuss everything from Quebec's political aspirations to who has and has not paid the rent...and the riots. The conversation is fresh because, for a rare time, it deals with racism in Canada in and of itself, instead of as a subset of American racism. Says one character, "Canada is ten times more racist than the United States; they just hide it better."

Despite its choppiness and the tedious one-of-everything makeup of its cast of characters, the work has some scrappy, snappy dialogue.

The Toronto Star wrote, "...[Riot] triumphantly transcends racial issues and becomes a useful metaphor for what it means to be a Canadian in the 90s." The Globe and Mail wrote, "Boisterous and intimate, entertaining and enlightening." Hour Magazine, of the Montreal production wrote, "a scrappy, fresh little item...there are flashes of a very similar play, Kennedy's Children by Robert Patrick. But where Kennedy's lamented the 70s, Riot laments a nation that could be so great if it just tried a little harder (the last moment of the piece is quite patriotic)." The Halifax Herald wrote of the Neptune production, "Moodie crams in so many issues that some can't be dealt with adequately..."

The play's pointed criticism of unacknowledged racism in Canada is unfortunately still pertinent in 2020.