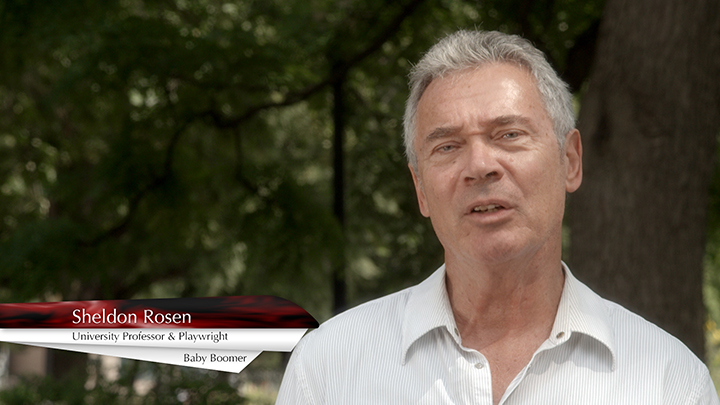 Ontario-based playwright born in the Bronx, New York, August 26, 1943 but grew up in Rochester, New York. He studied at the University of Rochester, and received his B.A. in psychology in 1965. He then took an M.A. in telecommunications and spent several years producing radio and television commercials. He moved to Toronto in 1970, and has been teaching and writing for the stage since 1972.

His first plays include a one-act absurdist comedy, Love Mouse (Toronto Public Library, 1972); Meyer's Room (Poor Alex Theatre, 1972), a surrealist one-act play; and The Wonderful World of William Bends (who is not quite himself today) (Tarragon Theatre, 1972, directed by James B. Douglas.

He also wrote shows for CBC television, which he continued to do after moving to Vancouver in 1973. There he became affiliated with the writer's workshop program of the New Play Centre (now Playwrights Theatre Centre), which produced a number of his one-act plays, including The Box (1975), Frugal Repast (1978, dir. Jace van der Veen), and Like Father, Like Son (1975)  later reworked and entitled The Grand Hysteric (1978). In The Box, which begins with an extended movement sequence, two roommates fantasize about an unopened gift; in Frugal Repast Picasso's harlequin figures come to life; and in Like Father, Like Son, a seriously disturbed young man has a traumatic session with his psychiatrist. Rosen has also written a children's play, The Stag King, adapted from Carlo Gozzi's play (Tarragon, 1973, dir. Stephen Katz, 1972), and the book for a musical, Alice in Wonderland (1974).

Although Rosen claims to prefer writing abstract and absurdist drama  his interest in movement has led to several mime theatrics including Dwelling (produced in 1977) and Impact (produced in 1980) his most successful work to date is the naturalistic play Ned and Jack (1978), commissioned by the New Play Centre. Set in New York in 1922, it is about a late-night encounter between the popular American dramatist Edward Sheldon and his close friend John Barrymore, who  still in costume and full of the success of his opening night as Hamlet  climbs the fire-escape to Ned's penthouse apartment. Both artists are at a turning point in their lives: Jack is triumphant as an actor, while Ned has just learned that his paralysing illness is irreversible  he will be bedridden for the rest of his life. A sensitive and compassionate play, Ned and Jack combines humour, intense emotion, and careful character delineation. It was well received when it opened at the New Play Centre in 1977; after considerable rewriting it ran two successive seasons at the Stratford Festival in 1978 and 1979, and in 1980 it earned for Rosen the Canadian Authors' Association award for drama. After its 1980 off-Broadway run it was called one of the ten best plays of the year by Clive Barnes. A 1981 Broadway production (dir. Colleen Dewhurst), however, was not a commercial success.

Souvenirs (1985) was first produced off-Broadway in 1984 by the New York Theatre Workshop and was subsequently produced by Factory Theatre with the Shaw Festival, and Theatre Calgary. Set on an island off Australia, it is the account of a photographer's adventures during a political insurrection.

The Duck Sisters premiered in San Jose, California, while he was playwright-in-residence at the state university there, and produced in 1990 by Toronto's Theatre Plus. It returns to the comedic themes of Rosen's earlier writing, presenting the story of two middle-aged sisters who wear duck masks as a way to advertise an out-of-the-way antique store. Even though this is their last day in business, the sisters are exuberant because a flying saucer is coming to take them away.

Rosen's imagistic adaptation of Ibsen's An Enemy of the People was produced by the National Theatre School of Canada in 1994.

Rosen has been playwright-in-residence at the National Arts Centre, the Stratford Festival, the Shaw Festival and Toronto Free Theatre.

He was chairman of the Playwrights Guild of Canada and taught playwriting at the National Theatre School of Canada.

He is currently writing and teaching in Toronto and is an Associate Professor of Creative Performance Studies at the Ryerson University Theatre School. His new play 11places@once was presented in May, 2006 in Vancouver as part of the Playwrights Theatre Centres Festival of New Work.

Viewings: Behind the Scenes at the National Theatre School, dir. Luc Bourdon. Groupe Mediavision Inc., 1997, in which Sheldon Rosen speaks of his work at the School.