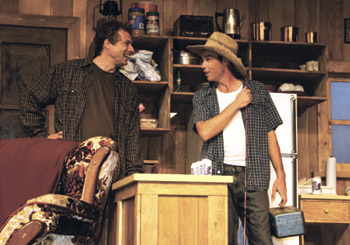 Dramatic comedy in two acts by Norm Foster, premiered at Theatre New Brunswick October, 1984, directed by Malcolm Black, set and costumes by Patricia Clark, lighting by David Gibbons, featuring Robert King, John Dolan, Deborah Kimmett and Patricia Vanstone. It was subsequently produced extensively across the country and abroad in French and in English. The Melville Boys was Fosters second published play, and established him on the Canadian theatre scene. In 1988 it won the Los Angeles Drama-Logue Award.

It is not difficult to see why this play is so popular both with theatre companies and audiences. It has the right blend of comedy, character, plot and a touch of drama that comes dangerously close to (but never teeters into) melodrama.

Two working class brothers, one a big goof, the other a slightly more cerebral fellow (who is terminally ill with cancer) come to a lakeside cabin for a weekend. While there, they encounter two sisters, one a silly wannabe actor, the other a more serious, intelligent lady. They pair up, and the result is a story that is satisfying with some comic set pieces that are little gems (including a moment when the silly sister acts out her most famous commercial and then thinks, "I'm dying" is a pick-up line). The second act is much shorter and handles most of the dramatic weight of the work.

Though the characters could be dismissed as caricature, Foster offers genuine humanity in the writing and, indeed, sets out acting challenges for performers.