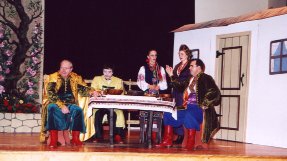 The productions took place on Torontos stages and then in various cities of Canada and the United States. For over 40 years Zahrava has been located at the Ukrainian Cultural Centre at 83 Christie St. in Toronto. 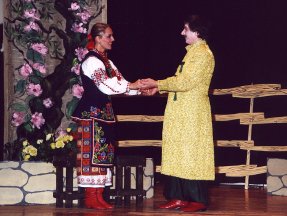 Zahrava was a member of the OMTA  Ontario Multicultural Theatre Association, an organization which ran up until the mid 1980s, and held annual ethnic theatrical festivals in which Zahrava took part. The group has won many awards such as: best leading/supporting actors/actresses, best performance of the festival, best Canadian play, best costume design.

There was a hiatus in Zahrava's activity during the 1990s when old actors passed away, new ones were still developing, and the theatre was in search of a director.

In 2003 Zahrava celebrated its 50th Anniversary and officially changed its name to: The Ukrainian Drama Theatre Zahrava.

In 2007 and 2008 Zahrava successfully presented Nelehalka by Anatoliy Krym, another contemporary Ukrainian playwright, including presentations in New York, Philadelphia, Chicago and Cleveland.

The government of Ukraine has recognized various individual members of Zahrava: in 2005 Mykhaylo Lalka and Nina Tarnovecky were given the distinction of Merited Artist of Ukraine, and in 2007 Ilariy Kushnirenko and Josef Terlicki were recognized as Merited Cultural Workers of Ukraine. In 2009, The Ministry of Culture of Ukraine presented Certificates of Accomplishment to Josef Terlicki, Larysa Bajus, Stefan Genyk-Berezowsky and to artists, Oleh and Natalya Valenyuk, who design the sets and costumes. 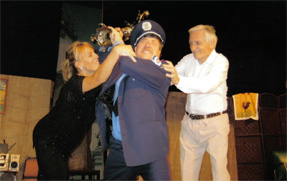 Josef Terlicki, who became Artistic Director in 1988 after the death of Volodymyr Dovhaniuk, directs Zahrava's productions. Directors from Ukraine, Fedir Stryhun and Inna Pavlyuk, have worked on a Master Class basis with the group.

Zahrava is currently working on a production of the tragicomedy Gospel of Ivan by Anatoly Krym. It is also preparing to celebrate its 60th anniversary in 2013.