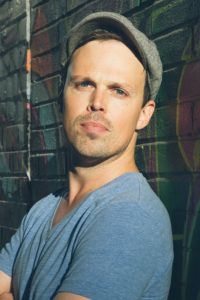 Innovative and imaginative director, dramaturg, actor, writer, and designer from Halifax, Nova Scotia, and a founding member and artistic co-director of 2b Theatre Company. Christian Barry has a B.A. (Honours) in Theatre from Dalhousie University, and is a graduate of the directing program at the National Theatre School of Canada.

With Stewart Legere, Barry formed The Accidental Mechanics Group in 2011 to facilitate the production and touring of their original collaborations which explore and celebrate the nature of persona, queer identity and performance through storytelling, music, dance and media. The company has presented work at theatre festivals including Videofag, Queer Acts, Stages, OUTstages, SummerWorks, PuSh International Performing Arts Festival, and Festival TransAmériques. For MT Space's Impact '17, he directed Legere in Let's Not Beat each Other to Death.

Barry is married to playwright, Hanna Moscovitch, with whom he has collaborated on several projects. They have one son, Elijah.