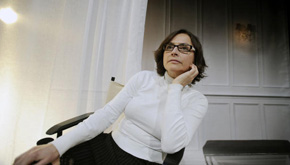 Actor, playwright, director, born 1960 in Victoria, British Columbia, died December, 2010 in Toronto Ontario of cancer. She graduated from the National Theatre School of Canada in 1982, and began her acting career with the Stratford Festival in 1983. In November 1984, she performed in the premiere of George F. Walkers Criminals in Love at the Factory Theatre. She subsequently appeared in theatres across the country.

For twenty years she worked extensively in film and television, including in the Walker TV series This is Wonderland.

Her play, My Mothers Feet about the incestuous relationship of a mother and her son, premiered at Canadian Stage in 2005 (dir.Micheline Chevrier).

Her talents as a director, however, were particularly noted when she replaced the ailing Neil Munro to direct Born Yesterday (2009) at the Shaw Festival. She also directed Half an Hour at the Shaw in 2010. Her last directing gig was The Seafarer by Conor McPherson (Manitoba Theatre Centre 2010).

She married actor and long-time partner,Tom Rooney just before her death.