In 1998, Michael Scholar Jr. produced the world English premiere of The Black Rider by rock icon Tom Waits, beat poet William S. Burroughs, and theatre maverick Robert Wilson at the Edmonton International Fringe Festival (directed by Michael Scholar, Sr.). The exuberant, flamboyant staging of the show was a critical success, and the run was extended at Theatre Networks holdovers at the Roxy.

In 1999, the Company was invited to bring The Black Rider to New York as part of the juried New York Fringe Festival. During the remount, the show and Company went through some changes: a new director, Ron Jenkins; a new musical director, Corinne Kessel; a new designer, Marissa Kochanski; and a more portable 3-piece band. The show received the Festival award for Best Direction and became the highest selling show in Festival history, filling the Harry Du Jur Playhouse (350 seats) for the entire run. This production defined November Theatre as an ensemble of like-minded artists who wish to create dynamic pieces with a unique theatrical language through heightened text, stylized movement and rockin tunes (website).

In 2000, this revamped version of The Black Rider returned to Canada and toured to the Winnipeg Fringe Festival and back to the Edmonton Fringe Festival with more accolades, another extended run at the Roxy Theatre, and winning a Best Fringe Production at the Elizabeth Sterling Haynes Awards (Sterling Awards).

In 2006, The Black Rider was remounted for the Magnetic North Theatre Festival in St. John's, Newfoundland. The show was also invited to be presented at the Edmonton Fringe Festival 25th Anniversary Gala. Later in November, November Theatre was honoured by receiving the City of Edmonton's Salute to Excellence "Performance and Citation Award".

In January 2008 The Black Rider returned to Vancouver with a run at the Arts Club Theatre, co-presented by the PuSh Festival. It won a Jessie Richardson Award for Best Production (Large Theatre)".

The show was retired in the fall of 2008 after a six-week sold-out run at Tarragon Theatre in Toronto. This final run was nominated for Best Touring Production at the Dora Mavor Moore Awards. The Black Rider has made Canadian theatre history, becoming the only show to have ever been honoured for best production by the Jessie Awards, the Betty Mitchell Awards, and the Sterling Awards.

In the summer of 2010, the Company contributed a scene entitled Killing Konundrum to the modern Morality Play, entitled Everyone, performed in horse-drawn carts in seven acts by Caravan Farm Theatre, with Neworld Theatre, the Electric Company, Pound of Flesh Theatre, Theatre Melee and Theatre Replacement, with music by David Rhymer. 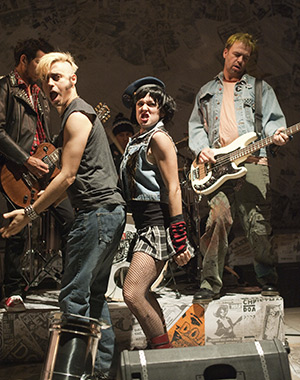 I Needle East Van: Sights and Sounds from the Vancouver Punk Scene was mounted in the Vancouver Art Gallery, with Michael Scholar Jr. as DJ/performer/producer, playing Vancouver punk and indie records against the backdrop of striking black and white photographs taken by legendary rock shooter, Bev Davies, from the late '70s to mid '80s.

In 2014, November Theatre started producing work in New York, where Artistic Producer Michael Scholar Jr. is pursuing an MFA in directing from Columbia University. With Columbia U, he produced Ilsa, Queen of the Nazi Love Camp, written by Blake Brooker, music by David Rhymer. He also directed a production of Uncle Vanya by Anton Chekhov.