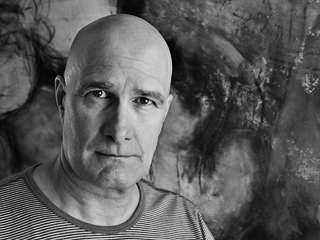 Quebec-based, but internationally recognized, actor/dancer/choreographer, best known for his work with Carbone 14 (including Le Dortoir).

Rodrigue Proteau was born May 21, 1956. He studied movement/mime with Jean Asselin and Denise Boulanger before joining Carbone 14 in 1987. He participated in the choreography for Hamlet-machine, Peau, chair et os, and the work he co-created (with Johanne Madore and Jerry Snell), Krieg. In 2000, when Carbone 14 was on hiatus while Gilles Maheu directed various productions around the world of Notre Dame de Paris, Proteau left the company.

He performed in the multi-media production, Orféo (conceived by Michel Lemieux and Victor Pilon, Montreal, 1998). He also appeared in Robert Lepage's The Geometry of Miracles/La géométrie des miracles which toured internationally (1999/2000). In April, 2001, he performed in the Pigeons International production of L'Autre.

Proteau joined Cirque du Soleil in 2000 as trainer and performer in Varekai, which toured the world for fifteen years. He also appeared in Love in Las Vegas in 2006. He has also performed in film.

Proteau's performances are marked by a strong physical presence, combined with a surprising elegance.