Ascend As the Sun 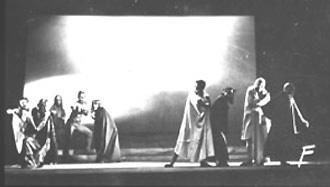 Ascend As the Sun

Begun in January of 1937 and completed in December of 1941, Herman Voaden's autobiographical Ascend As the Sun was first staged by his Play Workshop at Hart House Theatre April 13-16, 1942, and was his last symphonic expressionist production. Through the play's central character, David Branton, Voaden dramatized his own life from 1903 to June 1920: his birth, childhood experiences, adolescence and the beginning of manhood.

In the production, Voaden used the forestage to represent the realistic interior of the Branton home and other locales, and an upstage inset stage on which dancers, allegorical figures, choral voices, music and light visually and aurally suggested a higher metaphysical reality, a vision of the unseen.

Much like the Stage Manager in Thornton Wilder's Our Town, a narrator, the Biographer, directly addresses the audience and seeks its identification with and involvement in the realistic action and characters of the play. Voaden also used three off-stage choral voices, Life, Earth and the Universe Spirit, as in the Prologue in Heaven in Goethe's Faust, to elevate the action of the play to a cosmic, universal, and timeless level.

In comparison with Canadian theatre production and dramatic writing during the 1930s and early 1940s, Ascend As the Sun is noteworthy for both its formal experimentation and daring subject matter: adolescent sexuality, religious doubt, contemplated suicide, and the concepts of Voaden's idealistic life philosophy. Ascend was technically the most complex production of all of Voaden's works, involving twenty-three actors, eleven dancers, ten singers and musicians, and fifteen persons on the staging, lighting, makeup and costumes and masks crew. The production climaxed ten years of Voaden's experimentation to blend music, dancing, speech, acting and lighting into his new theatre language of "symphonic expressionism."

Toronto critics, such as Augustus Bridle in the Toronto Star and J.E. Middleton in Saturday Night, praised this "double scenario of the realistic and the allegorical" of Voaden's "drama of man's rise from the earth to an ultimate super-humanity." In the Globe and Mail, the dean of Toronto theatre and music critics, Hector Willoughby Charlesworth, called Ascend "a unique example of experimental theatre." Critics also had high praise for composer Godfrey Ridout, who created the play's musical score, and the dancers of the Volkoff Ballet who choreographed its seventeen dance scenes.

Ascend As the Sun provides the clearest expression of Herman Voaden's idealistic belief that the divine is the ultimate projection of human aspirations, and that man's dreams of ultimate perfection, of the kingdom come on earth, were realizable within our lifetime. Voaden's ardent belief that "we become the gods we worship. We build the city we dream and desire" was shattered by the Second World War. In an attempt to bring about social reform on a political level, he became active within the Co-operative Commonwealth Federation party (the forerunner of the New Democratic Party) in 1943 and was elected the first President of the Canadian Arts Council (the forerunner of the Canadian Conference of the Arts) in 1945.