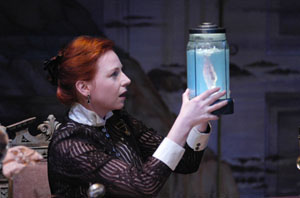 Anne-Marie MacDonalds play originated in an earlier work called The Arabs Mouth, which premiered at the Factory Theatre in 1990, directed by Jackie Maxwell. When invited by Maxwell to revise the play for the Shaw Festival in 2005 (directed by Alisa Palmer, she made extensive changes to the structure, theme and characters. As she indicates in an Afterward to the published text (Playwrights 2005): Whereas The Arabs Mouth was an almost truculent assertion of the primacy of the irrational and the relativistic, Belle Moral reaches out in two directions to reconcile the extremes of rationalism and romanticism, in an attempt to re-envision and to articulate afresh those core Enlightenment values that engendered the freedom and equality that we take for granted at our peril (p. 155).

The play is set in a Scottish manor house by the sea at the end of the nineteenth century, where Pearl MacIsaac is pursuing her scientific studies, even though her work has been rejected because of her gender. She does, however, have the support of the local physician, a Darwinist named Dr. Reid. Her brother, Victor, is more of a dreamer, with little in the way of practical skills to bring to the running of the household. A dark family secret comes back to haunt them, despite the attempts of the housekeeper, Flora, to prevent it. Once it is discovered, Pearl chooses against the opportunity for a scientific investigation as the wife of Dr. Reid, and embraces her deformed sister, who has been shut away from the family by Dr. Reid in order to protect them from the scandal of her birth and the mothers suicide.

The program for the Shaw Festival production included an essay on the play by Theatre Educator, Kathleen Gallagher, entitled La Fin de Siècle and the Pull of Opposites, which is reproduced with permission below:

What is objectivity but the ability to consider every influence on our powers of observation? Facts, uprooted, can tell us only so much. A fact out of context is like a fish on a slab, inexplicable without water. And so it is the story, an inextricable web of affinities, said Darwin, and not disembodied facts, that Ann-Marie MacDonald draws us into. In our journey to the coast of Scotland, 1899, she asks us to remember our own childhoods, our dreams and ghosts and hauntings, our apprehension of a world that calls on all of our senses. She asks us to observe our lives, our part in evolution. We are all here so briefly, says Pearl. Awake, for a moment. Unique, for a moment. Able to look and to love, for a moment.

Theatre, unlike literature, is a social art form and so it is important that we are here together to participate -- to see, hear, smell the stories percolating deep inside the stone walls, hidden attic, and candle-lit drawing room of Belle Moral. Five miles outside Edinburgh, itself a haunted city with phantom pipers and memories of murder, we are thrust into the present lives and troubling histories of the MacIsaac family.

Everywhere we turn, there is the pull of opposites: science versus nature, rational versus supernatural, past and present, conscious and unconscious, public and private, truths and lies, Protestant and Catholic, normal or deviant, highland versus lowland, drunk or abstemious, French or English, masculine and feminine, tragedy and comedy. Belle Moral is, in some ways, a meditation on these and other great themes of human preoccupation.

Historically, Scotland has been a place of just such contradictions. It is a land of legends, first whispered by fairies: crashing waves of the North Sea, twisting roads lined with stone, mist-covered mountains and sounds of distant pipes, flutes, harps, and wailing banshees; stories of monsters who live alongside the mortals that inhabit the small country. And in this world of fairies and hideous creatures, we have sciences search for truth. After the last battle for its independence from English rule in the spring of 1746, the undaunted spirit, the pride and deep curiosity of a people earned Scotland and the Scottish Enlightenment its glorious reputation in the story of the modern world and its advancement of human understanding. A recent book, How the Scots Invented the Modern World (2001), even argues that the great Scottish scientists and inventors of the second half of the nineteenth century -- Watt, Tellford, Nasmyth -- were largely responsible for the building and organization of the British empire.

Beneath the rugged beauty of the coast and Scotlands scientific genesis, we have the story of Pearl MacIsaac, a budding scientist in her own right. The biological determinism and moralism of social Darwinism, however, saw the emancipation of women as an attack on patriarchal culture and the natural way of the world. These rebellious daughters were swiftly labelled mentally disturbed or suffering from nerves. In her book The Female Malady (1985), Elaine Showalter points out that Jean-Martin Charcot, one of the first European theorists of the female disease that came to known as hysteria, believed that hysterics suffered from a hereditary taint that weakened the nervous system. The ovarian region, he concluded, was a particularly sensitive hysterogenic zone. In addition, he developed a theory suggesting that hysteria also had psychological origins. As such theories of biological sexual difference were given full scientific weight, the Victorian ideals of femininity tightened their grip.

Sigmund Freud, however, began to recognize the social and cultural constraints on women, and with his colleague Josef Breuer produced their Studies on Hysteria in 1895. This work presented a much more sympathetic view, maintaining that hysterics were not insane, but people of the clearest intellect, strongest will, greatest character, and highest critical power. Freud and Breuers case studies stood in contrast to many of the hostile portraits of hysterical females presented by European physicians of the Victorian period. At Belle Moral, however, it is brother Victors lust for life that most effectively unsettles the gender codes. Victor is morbidly effeminate, claims Pearl, but Victor is the artist, the female subject position, and not the effeminate. He is the one who seduces us into the struggle against repression. The artist is the one who refuses initiation through education into the existing order, offered Norman O. Brown in a 1959 study of Freuds work. Hence the dialectical interplay, in the play, between the extreme Rationalism of Dr Reid, who believes that insanity can be avoided by a life of moderation and the exercise of the will, and the ideals of those like Victor the Romantic, more drawn to the willing suspension of common sense.

While lunatics of the fin de siècle often fell silent or succumbed to paralytic seizures, Victor concocts a rich dream-life as an outlet for his spirit and a clear, sobering philosophy by which to live. Dreams, or wish-fulfillment, are the work of the unconscious, argued Freud, at a time when his contemporaries had little appreciation for such things that could not be properly measured. Both Pearl and Victor are immersed in the life of the imagination, which opens up other worlds. These other worlds, it might be said, underlie our normal experience, and for both Pearl and Victor there is a dangerous yet desirable attraction to the irrational, the seemingly abnormal. Playwright MacDonald believes that consciousness and dreams form a compound as necessary for life as hydrogen and oxygen.

If Freud was right in suggesting that our dreams, our humour, and slips of the tongue explain in some way our mental states, and reveal in covert form what would otherwise not be understood at all, Pearl may well be on the cusp of discovering what was always there, morally inescapable but unarticulated: Darwins inextricable web of affinities. While Dr Reid might be playing God with his presumptuous science, Pearls love illuminates the important questions: And what are we to do in Gods place? How are we to know what Gods work is?

Ann-Marie MacDonald has been interested in alchemical transformations, the unconscious, and the fantasies of gender play since such earlier works as Goodnight Desdemona (Good Morning Juliet) and Anything That Moves. These are narrative interests we have seen before. But in Belle Moral, the world of the senses and sense perception also drive these narrative tropes. We have Aunt Flora who believes in the communication of spirits (Your ancestors are tryin to tell you something) and Puppy with the canine sense, more acute than that of humans and more sensitive to the supernatural presence.

But what or who will be transformed this time? How does history get mapped onto the present? Where might our unconscious lead us in our pursuits of truth? How do our ancestors talk to us? Do we admit to our connection in diversity, to our common ancestry, to being a part of that exquisitely, well-nigh infinitely complex web? Darwin himself explained:

Perhaps it is no surprise that Ann-Marie MacDonald would tell a truly postmodern tale set at the height of the great project of modernity, for paradox is her centerpiece, while story is her form:

PEARL: Doctor, you look at us and see a jumble of unrelated, distasteful facts. I look and see affinities.

Deeply implicated in our own histories of family and culture, MacDonald takes the socially natural configuration of family and paradoxically asks how sure we can ever be of the constitution of family. If it is the case that we are free agents as well as products of history, accidental and inevitable, like the best stories, then family can be imagined and can further set our psychic apparatus in motion, as in a wish. Our roots/routes to family are multiple.

Pulled, as always, by the reconciliation of opposites, Ann-Marie MacDonald has an unquenchable fascination with puzzles and a certain penchant for the comic turn:

PEARL: I dont believe in ghosts.

FLORA: Thats of nay concern to the ghosts.

Seeking to regain the lost laughter of childhood, she can rarely resist a pun or the opportunity to find the playful in the serious, especially, she explains, when she writes for the theatre. In an interview published in 2003, MacDonald describes what she does as driven by a love of the audience and a love of performing:

I found a great intellectual hunger and curiosity, combined with a love of stories and a love of the fabulous  I want to give the audience a reason to stay, give them a reason to want to find out more and to want to identify with different points of view, different experiences. For me, thats my hardcore passion: put yourself in someone elses shoes.

As we move into the final scenes of Belle Moral, MacDonalds love of the fabulous is in full force; the secrets, laid bare. For lies never protect us, as poor Dr Reid must learn. Knowledge is power, said Sir Francis Bacon in the sixteenth century, and this became a slogan of the Enlightenment midway between his time and our own. Since then, the closet doors have burst open  tant mieux! We need to know our stories and let the ghosts out.

Commentary by Kathleen Gallagher, Ontario Institute for Studies in Education, University of Toronto.