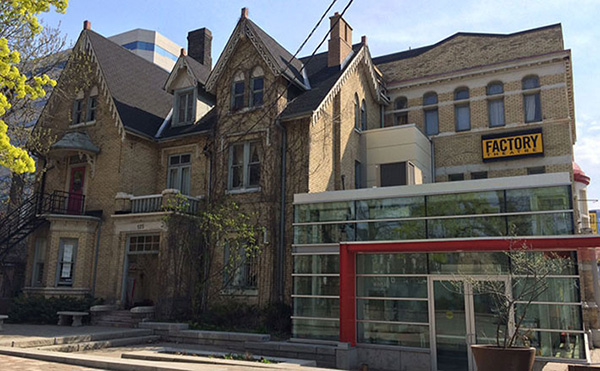 The company has been at the forefront of the Alternative and Experimental Theatre scene from the start but has also been a hothouse for Canadian writing. Said Gass at its creation, "By limiting the Factory to only new Canadian plays, we were forced to abandon the security blanket of our colonial upbringing." He further proved his commitment to the company by, at one time, paying its rent out of his own pocket.

The Factory is a training ground for actors, directors and particularly playwrights. It opened on the second floor of a garage but moved to downtown Toronto soon after. Gass launched a series of playwrights' contests and began a workshop program. Within ten years the company had premiered 50 new plays. Its roster is an engaging (and politically engaged) series of productions including: David Freeman's Creeps, George F. Walker's Criminals in Love and Zastrozzi, and Gass' Hurray For Johnny Canuck and Winter Offensive (this last causing a huge stir and calls for cuts to public funding of the company for its bluntness).

The company was on the edge of bankruptcy, but with a series of successful productions in its 1995-96 season and a budget cut of 25%, the deficit was slashed back to $400,000. In November of 1996, Springate resigned as AD and was replaced by the company's founder, Ken Gass.

In March, 1999, the company finally was able to buy its Bathurst Street venue (with plans to renovate the building) following a particularly successful season which included George F. Walker's Suburban Motel series. As a result, its 30th Anniversary party in May, 2000, was particularly celebratory. However, in June 2012, Gass was fired by the Board over a difference in opinion about the extent and cost of renovations to the theatre, and several playwrights, including Walker, withdrew their plays from the theatre. In September, Nina Lee Aquino and Nigel Shawn Williams were appointed as an interim artistic team. Nina Lee Aquino was AD from 2014 to 2022.

For its 2016/17 season, entitled Beyond the Great White North, Factory focused on cultural, social and racial diversity, with all of the plays by playwrights of colour. It opened with the premiere of David Yee's Acquiesce, set in both Toronto and Hong Kong, and travelling backwards and forwards in time to a crucial meeting point. The Enchanted Loom by Sri Lankan neurologist Suvendini Lena was co-produced with Cahoots Theatre Projects. The season also included: Empire of the Son by Tetsuro Shigematsu; How Black Mothers Say I Love You by Trey Anthony; Little Pretty and the Exceptional by Anusree Roy; and Banana Boys by Leon Aureus.

The 2017/18 season featured intercultural works and co-productions: The Fish Eyes Trilogy by Anita Majumdar with Nightswimming Theatre Company; Trace by Jeff Ho with b current; Bang Bang by Kat Sandler; After Wrestling by Bryce Hodgson and Charlie Kerr with Blood Pact Theatre; The Monument by Colleen Wagner; and Prairie Nurse by Marie Beath Badian with Thousand Islands Playhouse.

For the 2018/19 season, Factory produced plays from across Canada, including: The Men in White by Anosh Irani, Bears by Matthew MacKenzie, Angelique by Lorena Gale, Beautiful Man by Erin Shields, The Tashme Project: The Living Archives by Tashme Productions, and We Keep Coming Back by SelfConscious Productions.

The theatre was closed in March 2020, because of the Covid-19 pandemic which precluded live audiences in theatres across Canada and the world. Factory commissioned five short audio plays by Yvette Nolan, Anusree Roy, Keith Baxter, Luke Reece, and Matthew MacKenzie for a series entitled You Can't Get There from Here available as podcasts free of charge between March 25 and April 22.

The Company's archives are at the L.W. Conolly Theatre Archives of the University of Guelph, Ontario.