Writer/critic born in Quebec City, Quebec, June 9, 1957. As a child, he toured Europe with his military father for three years (1967-70), being exposed to opera, theatre and fine art. On the family's return he became an apprentice critic at the Quebec Chronicle Telegraph where he reviewed theatre, music and film. After training as an actor at John Abbott College, Gaetan Charlebois worked briefly at Centaur Theatre as a publicist. During this time he managed his own semi-professional theatre company, The Group of Four, which among other works premiered David Fennario's Without a Parachute.

He won the Clifford E. Lee Award for Playwrights in 1978 for his play Aléola which was subsequently produced at Theatre 3, Open Circle Theatre, Alberta Theatre Projects, in a French adaptation (Jean Daigle) at the Théâtre du Rideau Vert and in an Acadian adaptation (Laval Goupil) at Théâtre populaire dAcadie in Caraquet. It was also performed on Radio-Canada (radio and television), and played in the United States and Great Britain. 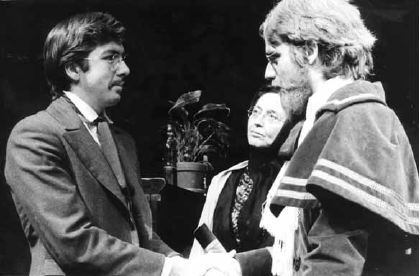 Though always controversial, during the 1997-98 season, Charlebois had two well-publicized run-ins with the theatre establishment. Following the premiere performance of Koltès Quai Ouest at Espace Go, he called out, "C'est d'la merde!" (It's s**t!), incurring the wrath of the company's artistic director, Ginette Noiseux and beginning a debate on the role of the critic which would last throughout the season. Later that season, Charlebois was denied ticket privileges by Centaur Theatre's new artistic director, Gordon McCall, for writing a less-than-glowing review of McCall's Gone With The Wind Twelfth Night. McCall also requested Charlebois's dismissal but the difficulties with both companies were resolved before season 98-99 began.

Charlebois is a member of the Canadian Theatre Critics Association and is the founder of The Canadian Theatre Encyclopedia on the WWW. He has also "edited" A Dog's Blog: Year One the Mooks, a dog's satiric and scatalogical perspective on contemporary culture. He lives in Montreal.