Orphans for the Czar premiered at Crows Theatre in April 2022 -- a black comedy that exposes the duplicity in Russia just before Bloody Sunday in St. Petersburg, based on the novel The Life of a Useless Man by Maxim Gorky. The protagonist, the orphaned fool Vasley, is a hapless double agent who tries to stay on the right side of both the revolutionaries and the czarists (Crows Theatre website). In a conversation with the director, Tanja Jacobs, Walker explained that he first started thinking about "why there were so many bad people, getting all these followers. Starting with Trump, but [he] was also just thinking of Putin back then. [He] heard a lot about how they attract the people who dont usually pay attention to all that stuff. But I thought there's something else going on here. They are vulnerable. There's a whole bunch of people who are just vulnerable" (Crow's Theatre website).

In his review for The Globe and Mail (4 April 2022), J. Kelly Nestruck enthusiastically welcomed Walker back to live theatre: "Orphans for the Czar, a comedy that had its world premiere in a cracking production at Crows Theatre on Friday, is a dark and funny return to form for veteran Canadian playwright and provocateur George F. Walker. Do its sympathies lie with the poor even as it refuses to romanticize them? Check. Does it cast a cynical eye on both the state of the world and attempts to reform it from above? Check. Does it have devilish jokes and move at a wicked pace? Check." 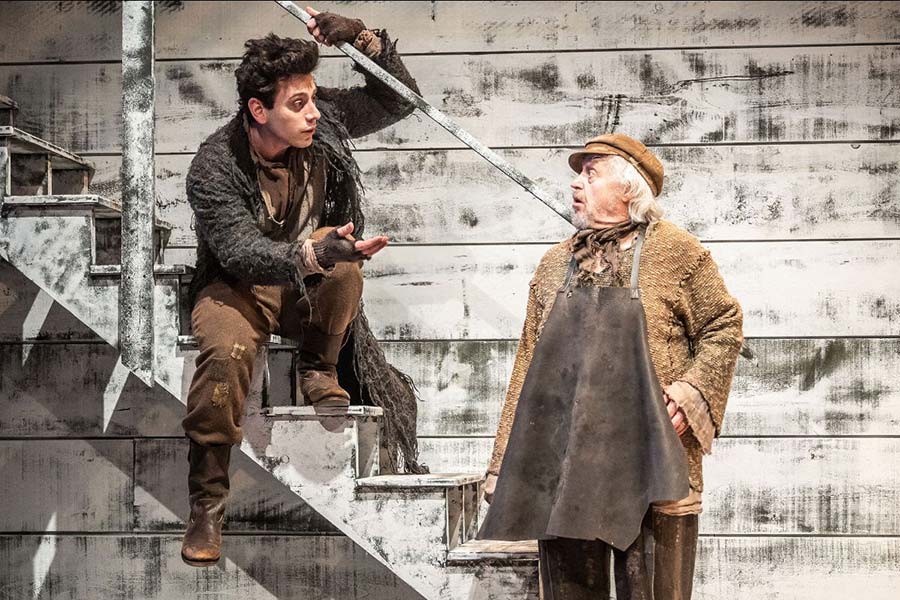 Paolo Santalucia and Eric Peterson in Orphans for the Czar at Streetcar Crowsnest. Photo by Dahlia Katz.