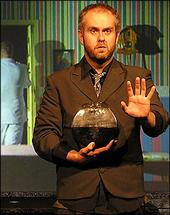 Robert Chafe in Belly Up

Playwright and actor, born and based in St. Johns, Newfoundland and Labrador. He is an award-winning author of twelve plays, and co-author of another ten, all of which have been produced in Newfoundland and other parts of Canada. He is best known for his collaborations with his partner, director/designer Jillian Keiley (Under Wraps, Emptygirl, Signals); and director Danielle Irvine (Place of First Light, Charismatic Death Scenes, Lemons). He is currently Artistic Director for Artistic Fraud of Newfoundland, for which he has written over a dozen scripts. These are typically large-scale collaborative musical productions, with an historical focus.

Fear of Flight (music by Jonathan Munro, directed by Jillian Keiley, with individual 5-minute monologues by Daniel MacIvor, Judith Thompson, Denis Clarke, Marie Clements, David Yee, Bryden MacDonald, Guillermo Verdecchia and Berni Stapleton) enacts the nervous tensions and diverse fears of twelve passengers and two flight attendants on a lengthy flight through monologue, music, and movement. Marie Clements piece presents the bizarre scenario of a woman who grew up in a house where everything was black, except for the bright yellow canary; Daniel MacIvors protagonist is intent on meeting Jesuss brother, in order to repay her brothers debt; Berni Stapletons character is a bride, widowed before the wedding. Guillermo Verdecchias character is visiting his estranged young son. The cast accompanies each monologue in a continuous chorus that underscores the mood, and establishes connections.

The play was initially developed with students in the Sir William Grenfell College theatre program and premiered at the LSPU Hall in St. Johns in 2008. In a co-production with Cahoots Theatre Projects and Die in Debt, it also played at the Factory Theatre (2009) and the Great Canadian Theatre Company, and was remounted at the Cultural Olympiad in Vancouver 2010.

Oil and Water (Artistic Fraud Feb. 2011, dir. Keiley) is the story of the only African American survivor of a 1942 shipwreck, whose life was positively changed by his rescuers--the residents of St. Lawrence, Newfoundland. An a capella chorus combines Soul music with Newfoundland folk songs, and enacts the roles. Oil and Water was subsequently produced at the Magnetic North Theatre Festival in Calgary, 2012, and is published by Playwrights Canada Press.

Chafe adapted Wayne Johnston's novel about Joey Smallwood, The Colony of Unrequited Dreams for Artistic Fraud in 2015, and it subsequently toured across Canada in 2017. It is published by Playwrights Canada Press (2017). Between Breaths by Chafe (dir. Keiley) opened in 2018. It depicts the life of Dr. Jon Lien, who pioneered techniques for rescuing whales entrapped in fishing nets. It is published by Playwrights Canada Press (2019).

For the Stephenville Theatre Festival, Chafe has written Vive la Rose, which recreates the life of legendary Newfoundland storyteller and fiddler, Emile Benoit. It was remounted as Emiles Dream by Artistic Fraud in 2011.

Chafe has also written works commissioned by Theatre Newfoundland Labrador: Tempting Providence is the story of British nurse and midwife Myra Grimsley, who signed a two-year contract in 1921 to practise in Newfoundlands rural communities and isolated outports. She stayed for seventy years, and became known as the Florence Nightingale of the North. Tempting Providence premiered at the Gros Morne Theatre Festival in 2002, directed by Jillian Keiley. It then toured six Canadian provinces, Britain and Australia, including the National Arts Centre (2003), Magnetic North Theatre Festival in Edmonton, Alberta (2004); the Edinburgh Fringe Festival (Traverse Theatre) (2005), the Island Festival in Tasmania; the PuSh International Performing Arts Festival(2006); the Belfry Theatre in Victoria; and Magnus Theatre Sudbury in 2010.

In 2010, his play, Afterimage (Harbourfront Centre, April 2009, dir Keiley, score for guitar and piano wire by Jonathan Monro) won the Governor Generals Award for English drama. Based on a short story by Michael Cummey, it connects an accidental electrocution with the deconstruction of a family.

He wrote the libretto for a new opera by John Estacio, entitled Ours(Opera on the Avalon, 1 July 2016), the story of the fallen soldiers of the Newfoundland Regiment in WWI, told from the point of view of Thomas Nangle, a chaplain in the army, who established five memorial sites along the Western Front, each marked by a bronze statue of a caribou, the Regiment's emblem.