Province on the East coast of Canada with an estimated population of 523,790 (2019), and a lively theatrical scene.

Newfoundland and Labrador joined confederation in 1949, but had already seen theatrical activity, including the typical entertainments of garrison soldiers and the tours of professional troupes from England. It also had a strong tradition of mummering which existed until the practice was banned in the mid-1800s. Part of the tradition involved travelling players performing during the twelve days of Christmas, in disguise, house to house; the material included rhyming lines and skits.

There was a long hiatus of professional theatre activity after 1949. CBC radio drama was the only home in St. Johns for professional acting or writing prior to the 1970, providing an opportunity for playwright and actor Michael Cook to create new works. Despite its short life, the Newfoundland Travelling Theatre in the mid-70s instilled a taste for doing theatre in artists who would later form and fuel Mummers Troupe (1971), Codco (1973) and Rising Tide Theatre (1978). The taste for theatre was also fostered by the Newfoundland and Labrador Provincial Drama Festival (Newfoundland and Labrador), created in 1950 and still going strong. 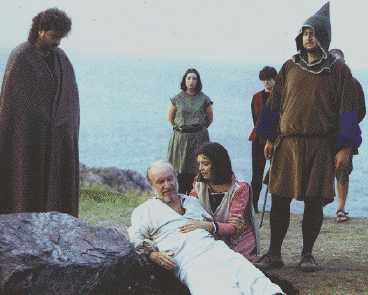 Shakespeare by the Sea Festival, Newfoundland's 1994 production of King Lear with John Moyse as Lear and Damhnait Doyle as Cordelia

In 1974, the Labrador Creative Arts Festival was launched in Goose Bay. In 1993, Shakespeare by the Sea Festival, Newfoundland began operations in St. John's. Wonderbolt Productions presented its work at the LSPU Hall, also in the capital (Uncivil Servant, 1998). First Light Productions performed Charismatic Death Scenes (1998), John Mighton's Possible Worlds (1999), Crazy for You (2000); and Beothuck Street Players performed Someone Who'll Watch Over Me (February, 2000). St. John's Artistic Fraud of Newfoundland toured Western Canada in January, 2000 with Under Wraps, A Spoke Opera.

Newfoundland has also been the home of some important playwrights, such as David French, Michael Cook, and Robert Chafe.

The province has also turned out a great number of satiric and comedy groups besides Codco. Among them is Buddy Wasisname and the Other Fellers.