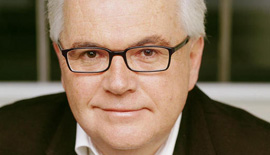 For over fifty years, since the 1970s, Bob White has contributed significantly to new play development and production in Canadian theatre, and nurtured playwrights. He was born in Montreal, Quebec in 1949 and studied at Loyola College (now Concordia University) and the University of Alberta.

He was the first Artistic Director of Playwrights' Workshop (1975-78) and served as Artistic Director at Factory Theatre (1979-87). He was a director, dramaturg, and Artistic Director, from 1999 to 2009, of Alberta Theatre Projects. At ATP, before he became Artistic Director, he was in charge of playRites which presented over fifty new works during his thirteen-year tenure. Among the playwrights whose premieres he has directed are Clem Martini (A Change of Minds), Eugene Stickland (A Guide to Mourning), Brad Fraser (Unidentified Human Remains and the True Nature of Love), Paul Ledoux (The Children of the Night), Rachel Wyatt (several of her short works), and Stephen Massicotte (Marys Wedding 2002, which he again directed at ATP in 2012).

He has also directed works from outside Canada including Wit, How I Learned to Drive, Angels in America (with D. Michael Dobbin), and Oleanna among others.

From 2009 to 2022, Bob White was Director of the Foerster Bernstein New Play Development Program at the Stratford Festival, when he was a dramaturg for King of Thieves by George F. Walker; Hirsch created by Alon Nashman and Paul Thompson in 2012; Paradise Lost by Erin Shields; The Breathing Hole by Colleen Murphy; the Queenmaker Trilogy: The Last Wife, The Virgin Trial, and Mothers Daughter by Kate Hennig; and Hamlet-911 by Ann-Marie MacDonald (2022).

In December 2009, Bob White was appointed a Member of the Order of Canada, for his contributions as a dramaturg in the creation, development and production of hundreds of new Canadian plays, and for his role in the promotion of arts and culture in Alberta. In 2018, he was presented with the G.E. Lessing Award for Career Achievement by the Literary Managers and Dramaturgs of the Americas, for bringing hundreds of new plays to the stage.

Of his work as a dramaturg and director, he has said: Thats the satisfaction of the job, knowing that youve helped nurture, the way a gardener nurtures plants, and all of sudden its there in full bloom (www.stratfordbeaconherald.com 29 June 18).