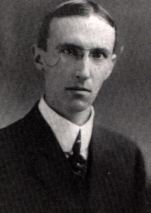 Founder (and leader, until 1929) of the University of British Columbia Players Club, the longest running dramatic society in Canada. He was born in Victoria in 1887, and died in 1976.

He graduated from McGill University in 1910, taught high school in Victoria for four years, and earned an M.A. from Harvard University in 1915. Wood joined the faculty of the newly-established University of British Columbia as one of the two original members of the Department of English.

As president of the Players Club from its foundation in 1915, he directed all of the plays staged from 1916 to 1931 by students at the University of British Columbia. Twice a year, the club toured one-act plays throughout the province. Wood also guided the careers of several successful theatre artists including Lister Sinclair and Dorothy Somerset (the first head of the UBC theatre department).

Frederic Wood was also involved in the founding of the Vancouver Little Theatre.

In 1953 the first Frederic Wood Theatre opened on the UBC campus in a converted snack-bar. A new theatre was constructed on the campus in 1963, which also bears his name. Annual seasons of plays  including professional productions  have become an important part of the Vancouver theatre scene.

The Frederic Wood archives are located at the University of British Columbia library.