Province of Western Canada with a population of 5.071 million (Statistics Canada, 2019) with a diverse multicultural population and a flourishing theatre scene.

As in the rest of Canada, it was amateurs who created theatre in their communities until the railroad linked the cities and towns of British Columbia to the other provinces, and enabled professional touring companies from the United States and England to come to the burgeoning cities. As soon as there was British Navy in the harbours (as early as 1853) there were the naval theatricals. But in British Columbia, particularly during the gold-rush, c. 1858 (which saw cities born, prosper and die in a period of a decade or so), organizations of amateurs turned out a great deal of theatre which ranged from abysmal to very good. Moreover, amateurs were often seen shoring up professional touring companies which came to the goldrush towns from all over the world. By 1862 Victoria had the Dramatic Association. New Westminster had a similar society, the Amateur Dramatic Club, by 1866. Many towns in the interior, too, saw societies formed to keep miners and loggers entertained - notably Nanaimo and Kamloops. 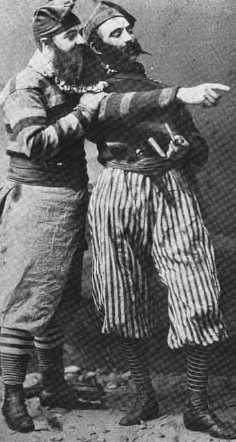 Though its first true theatre (as opposed to the top floor of a tavern where theatre might be presented) was a converted rolling-skating rink (Hart's Opera House), Vancouver saw a boom in the building of theatres. The Opera House (1891, demolished in 1969), the York (1912) and the Orpheum (1927, now home to the Vancouver Symphony).

Until the post WWII boom of made-in-Canada professional theatre, educational institutions and their teachers also presented plays and, indeed, helped create the future professionals from the province. Notable, here, is Frederic Wood at the University of British Columbia, founder of the Players Club. However, there were two companies in Vancouver which called themselves professional in the 40s and 50s: Everyman, founded in 1946 by Sydney Risk; and Totem, which began as a summer stock company in a West Vancouver park in 1951. After two seasons in Vancouver, Totem relocated to Victoria in what is now the McPherson Playhouse, closing for lack of support in 1954.

In 1963, the Vancouver Playhouse was born, attracting directors for new Canadian plays, including Malcolm Black, Joy Coghill, and David Gardner. In 1964, the Arts Club Theatre was founded. Indigenous theatre was on the rise but truly exploded with the creation of the New Play Centre (now Playwrights Theatre Centre) in 1970.

When the Liberal government created the Local Initiatives Program/LIP, British Columbian theatre artists saw a good thing and there was a mini-boom in theatrical activity between 1972 and 1974. City Stage was one of the longest running of the LIP-grant companies. With the new companies came a demand for more theatrical space. Vancouver East Cultural Centre, refurbished from a church in 1973, answered the call. Other venues include the Vogue, Ford Centre for the Performing Arts, Chan Centre of the Performing Arts (attached to the University of British Columbia), Firehall Arts Centre and Waterfront Theatre.

Innovation and exploration into multi-media, deconstruction and performance art soon followed. One of the key companies in Vancouver which explores virtually all facets of performance is Rumble Theatre.

In the capital of Victoria, Bastion Theatre responded to the more conservative tastes of the older population base, Belfry Theatre to those interested in a more adventurous theatre.

Important venues and companies elsewhere include the Massey Centre in New Westminster, Genesis Theatre in Ladner, the Surrey Arts Centre Theatre, and the Gateway Theatre in Richmond.