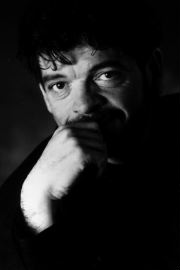 Playwright/composer/performer born in Ottawa, Ontario in 1946.

He was raised in Truro Nova Scotia, and graduated from Mount Allison University with a B.A. in English, and from the University of British Columbia with an M.A. in theatre (directing).

He moved to Toronto in 1975, working with Theatre Passe Muraille as composer and occasional director. He began his career as a writer in 1977 with 18 Wheels, an imaginative existential musical about the lives of truckers which premiered at Theatre Passe Muraille in 1977, directed by the author. Rock and Roll (National Arts Centre/Vancouver East Cultural Centre, 1981) is a dramatic Bildungsroman and an unsentimental appraisal of "the best time of our lives playing in a band."

The next of his works to reach national prominence was perhaps most symbolic of Gray's concerns over cultural sovereignty: Don Messer's Jubilee was a celebration of the unassuming little TV show that CBC had broadcast to great success and then cancelled when the network wanted to move with the times (despite the fact the show was still popular).

In 1998, he performed in Bishop again, opposite Eric Peterson at Canadian Stage and the National Arts Centre. In 2011, thirty years after its creation, the Soulpepper Theatre Company 2009 production of this quintessential Canadian play again travelled across the country, with Eric Peterson and John Gray reprising their roles, directed by Ken Dykstra.

Gray has won the Los Angeles Drama Critics Award, the Chalmers Award and the Governor Generals Award (all for Bishop...) and the Dora Mavor Moore Award for Rock and Roll.

He has also written several fiction and non-fiction works, including two novels, a collection of essays entitled Lost in North America: The Imaginary Canadian in the American Dream (Vancouver: Talon, 1994), the screenplay for the film Kootenay Brown (1990), and a series of satirical music videos for CBC's The Journal. He lives in Vancouver.