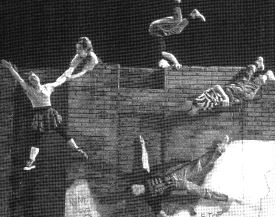 A scene (on the walls) from Mur-Mur

A children's theatre phenomenon, the piece has been performed, in French and English, to huge success over 1000 times since its premiere and has toured internationally. Aimed at children 9 and older, the text makes way for acrobatic flights as the piece explores the beginning of love.

It tells of two young couples and of a malicious boy, all pulled between childhood and adulthood. A wall (in French un mur), covered in graffiti, becomes a playground, a refuge, a place for murmurs and memories. Because dialogue is kept to a minimum (and acrobatics dominate) the piece has travelled very well. Critical reaction has been generous with Montreal's Le Devoir saying, "Whether you're 8, 12, 18 or 50, the entire hall vibrates, a current passes through and emotion can be read on all sorts of faces."