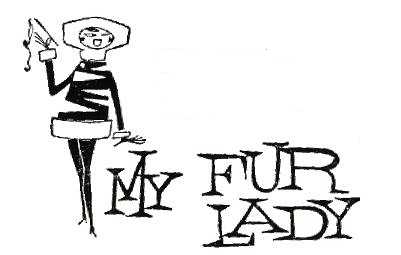 Comedy revue, premiered at Moyse Hall of McGill University, Montreal, Quebec, February 7, 1957, as part of the annual Red and White Revue at the University. It went on to become a pan-Canadian smash hit playing, notably, at the Avon Theatre, Stratford (though not as part of the Stratford Festival) and the Royal Alexandra Theatre. The title is a takeoff on the Lerner & Loewe musical, My Fair Lady, which was a huge success on Broadway at the time.

The four originators of the work (MacSween, Domville, Wang, Porteous) were law students.

Called, by one reporter, "a timely, sometimes racy and nearly always funny spoof of national self-consciousness..." the work satirized everything (and as it toured nation-wide, it took on new political issues and personalities) within a loose framework, such as an Inuit princess looking for a husband and a Governor General dealing with Ottawa politics and the joining, to the nation, of the princess's independent principality, which featured songs "The DEW Line Drag," "Teach Me How to Think Canadian," 'Honey, Don't be Highbrow," "Royal Victoria Rag," "A True Canadian Romance", and dances.

By the time the work went on its national tour in the summer of 1957, the producers were claiming that it had played to more people (20,000) than any other English-language work in the history of Montreal.