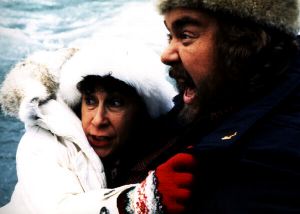 John Candy (with Rhea Perlman in the film Canadian Bacon), an alumnus of Second City, Toronto

Comedy company in Toronto, Ontario, created in 1973 and similar to the parent company of the same name in Chicago, Illinois, which began in 1959.

Second City presents comedy in a cabaret setting. Performances consist of sketches, written and improvised by the performers, with suggestions as to form and content from the audience.

The Second City performed at the Old Firehall until 1997 when it moved to a new hall in the theatre district.

In May, 2000, the company launched the revue Sordido Deluxo, its 48th production. In December, 2021, Second City returned to live performances, following its closure of over a year due to the Covid-19 pandemic, with Welcome Back to the Future, a revue that satirizes the idiocies inherent in political correctness.

It has training centres in Toronto, Chicago, and Hollywood, and four Canadian touring companies, as well as companies on cruise lines. From 1976 to 1984, it produced SCTV, which featured shows such as Great White North with hosers Bob and Doug MacKenzie.