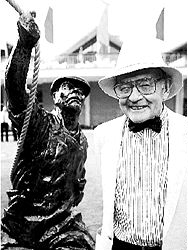 Tom Patterson before his beloved creation, the Stratford Festival Theatre

Journalist and theatre pioneer, born in Stratford, Ontario in 1920, died February 23, 2005, who championed the creation of the Stratford Festival. He was also co-founder of the Canadian Players with Douglas Campbell

After serving in WWII, he graduated from the University of Toronto with a B.A. and worked as a journalist. Convinced that a large-scale Shakespeare festival was viable, his contacts with Dora Mavor Moore and other Canadian theatre practitioners led him to Tyrone Guthrie and the creation of the Festival in 1953.

The company has since named its third theatre after him, and an island in the Avon River. In 2002, he was celebrated in an appearance on the Festival Stage, fifty years after the opening of Richard III.

He was also a founding director of the Canadian Theatre Centre, founding president of the National Theatre School of Canada, and founder of the Dawson City Gold Rush Festival. He was appointed a Member of the Order of Canada in 1967, and an Officer in 1977, and has honorary degrees from the University of Toronto (1981) and the University of Western Ontario (1988).

He lived in Toronto for his last thirty years with wife Pat, and was the father of five children.

A second edition of his 1986 book First Stage: The Making of the Stratford Festival (with Allan Gould) was published in 1999 by Firefly Books.